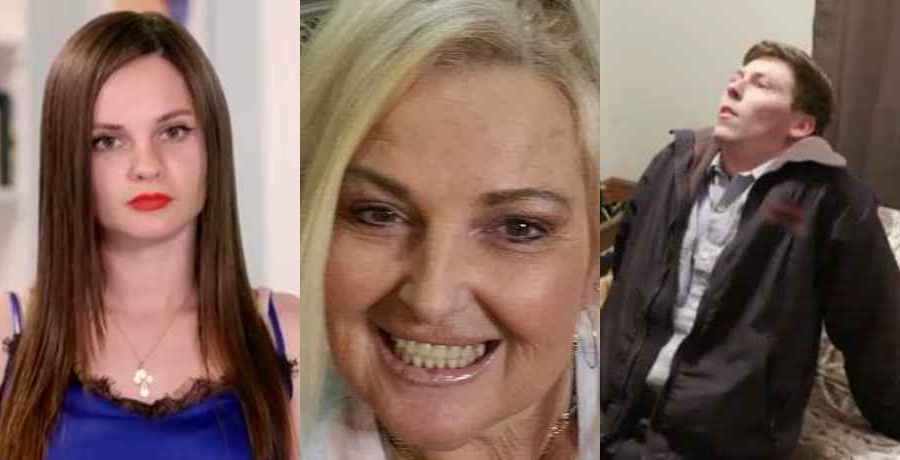 90 Day Fiance star Angela Deem featured on the first episode of the Discovery+ spinoff 90 Day Bares All. She went on to give very detailed and implicit intimacy advice to Brandon Gibbs. Deem told Brandon that “he’s got to satisfy the love of his life” and she knows how.

As reality TV fans probably know, shows can be a little more open in their content on Discovery+. 90 Day Fiance star Angela Deem took full advantage of that fact on her first appearance on the spinoff 90 Day Bares All. Season 8 star Brandon Gibbs, 27, also appeared on the show and was given detailed advice on his lovemaking issues with Julia Trubkina, 26.

Angela joined Brandon’s segment on the spinoff, where he spoke about his storyline with his Russian fiancé, Julia. The pair is facing several issues because they currently have to live with Brandon’s parents on the family farm. The Gibbs have made it abundantly clear that they will not budge on their rule that Brandon and Julia must sleep in separate bedrooms until they marry. The mother is already worried that Julia might fall pregnant.

Angela Deem and her advice to Brandon

Angela, 52, gave sage advice on the show, including the words, “Take the t–ty away from the mouth. You have a woman now, you’re going to marry her. Quit being a mama’s boy.” Deem did note that this might break Brandon’s mother’s heart a little, but she tells him to trust her. She is a mother herself and said that in the long run, Brandon’s mom will be proud that he stood up to her.

Angela suggests he tell his mother, “Mom I love you but we have to leave this house because I got a wife I’m getting ready to marry and she wants s*x three or four times a day.” She added that he has to realize his “c**k belongs to Julia now.”

90 Day Bares All host Shaun Robinson went on to play a scene filmed during Season 8. However, due to its sexual nature, TLC couldn’t air the scene. It revealed Brandon and Julia sitting in the car, fighting over their living arrangements. Eventually, the pair makes up and starts making out, with Julia performing a s*x act on Brandon while the cameras rolled.

After viewing the explicit content, Angela declared, “You didn’t satisfy her!” She says, “Poor Julia,” and asked viewers, “Can you imagine?” Deem went on to say Julia probably had to take a shower and hope that it had one of those vibrating showerheads. According to her, without that, Julia probably isn’t getting any satisfaction.

For his part, Brandon insisted there was more to the clip that wasn’t revealed. He asked the camera crew to play it again, but Angela said she didn’t want to see it. However, the star of Season 5 of 90 Day Fiance: Happily Ever After continued sharing her advice. She said that Brandon needs to tell his mother to let them be a couple. They must be allowed to make love in the same room. Alternatively, as he doesn’t have much money, he will need cash to rent a hotel room twice a week to satisfy Julia.

90 Day Fiance star is missing her home in Russia

Angela pointed out where some of the problems in Brandon and Julia’s relationship stem from. She said it is the fact that Julia is missing home. She isn’t getting the attention she deserves. Brandon did agree with Angela, but she warned him to “hold on” to Julia, as she is sure to have many men who would love to s*x her up.

Before the segment ended, Angela gave her final words of wisdom to Brandon, telling him what to do to her. As noted by In Touch, Deem laughed, saying, “Brandon, don’t forget: drop your balls.”

90 Day Bares All aired on Discovery+ on Monday, January 4. Catch Brandon and Julia in 90 Day Fiance on TLC on Sundays at 8 pm ET.