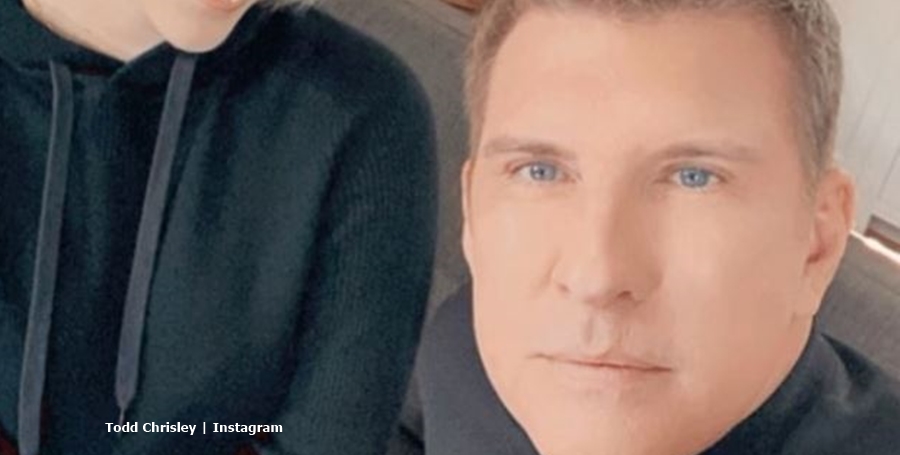 Todd Chrisley often shares inspirational posts on Instagram. Sometimes, he’s a bit hard-hitting with trolls though. Nevertheless, his latest post shocked fans who felt it unnecessarily “vulgar.” Of course, they seemed even more shocked as he professes to be a practicing Christian. So, critics slammed the patriarch of Chrisley Knows Best for it.

We reported that Todd posted up a meme this Christmas that fans appreciated very much. It said, “This is not the year to get everything you want. This is the year to appreciate everything you have.” And USA Network fans thought it very apt with the coronavirus around. It came shortly after he got less praise for a meme about the bible. People enjoy it when he shares inspirational things. But people don’t really like it when he starts preaching about the Bible. Bear in mind, not all the fans who watch Chrisley Knows Best are practicing Christians.

However, his latest post seemed rather crude, for any Christian. Or for even any decent sort of person, Todd Chrisley’s critics complained. On January 9, Todd posted up a card that read, “Laughing makes your vagina tighter, so maybe you should stop scrolling past my posts, loosey-goosey.” Well, it seems that many more people might scroll, on in the future. Some people felt very offended by the vulgar post and they slammed him for it

Critics hit back at Todd

Another one wrote, “that is a disgusting thing to say!!!! If you can’t say something nice don’t say anything at all!!!”

Next came this comment: “I have a VERY healthy sense of humor, and am quite naughty myself with my humor, but that was completely inappropriate, AND TACKY. I am deeply disappointed. I thought you had more class than that.”

One Todd Chrisley critic told him it seemed “somewhat vulgar.”

In reply to the people who complained, inside the comments, Todd said, “but I did say something nice, I said “VAGINA” when I could’ve said “ PUSSY.”

Some of his fans wondered why people felt so offended. But actually, for some fans, they felt Todd Chrisley was extremely demeaning to women. However, others made even more vulgar comments to those people who complained about the post in the first place. And they went on about fingers, and various other things intimate. Then, some of them talked about “freedom of speech.”

Life & Style reported that Todd racked up a reputation for clever and hard-hitting clapbacks. So, maybe he put up the post just knowing followers would complain. After all, it gave him more opportunity to slap at people who don’t like his posts. One supporter pointed out to those who felt offended that Todd Chrisley’s Instagram comes with an “unfollow” option if they don’t like it. Possibly, some of them used that option after they read the “vulgar” post.