Savannah Chrisley went out for Dunkin’ Donuts with her sister/niece yesterday. And, she shared a snap from her trip to get donuts on her Instagram Story. Likewise, she seized the photo as an opportunity to share a powerful message with her followers. What was the message? Keep reading.

Savannah Chrisley has faith in the innocence of children

Now, Savannah’s powerful message was a quote from someone else. But, the meaning was there nonetheless.

The caption on her photo of Chloe read: “Children are not only innocent and curious but also optimistic and joyful and essentially happy. They are, in short, everything adults wish they could be. – Carolyn Haywood.”

So, it seems like Savannah Chrisley is on the side of those who believe hate and racism are things taught. Unless children are taught otherwise… They are born sweet, happy, and loving.

The quote more or less suggests if adults acted more like children… Maybe the world would not be such a bad place.

Who is Carolyn Haywood, anyway?

Naturally, some people want to know where the powerful quote Savannah Chrisley shared came from. So, who is Carolyn Haywood? A search to learn more about this woman leads to Scholastic.Com. The website reveals she was an American author and illustrator. She was born in Philadelphia, Pennsylvania. She has 47 children’s books credited toward her name. So, her quote about the innocence of children makes sense.

Unfortunately, Carolyn Haywood is no longer with us. She passed away on January 11, 1990. Her death, however, didn’t come as too much of a shock. She was in her 90’s at the time of her passing.

Chloe is a controversial topic in the Chrisley family

As those who follow Savannah Chrisley and her reality TV family know… Chloe is a pretty controversial topic. More critical fans tend to bring up her race pretty frequently. The family often gets criticized for not exposing her to her culture enough. Likewise, Todd and Julie get criticism for even having Chloe. These days, Kyle has a steady girlfriend. And, his life seems back together. So, fans don’t understand why he hasn’t reclaimed his daughter. Shouldn’t she be with her father? 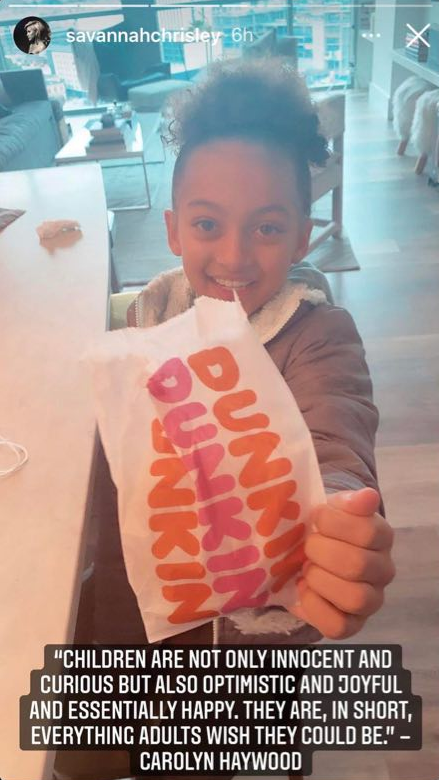 Furthermore, Chloe calls Todd her daddy and Julie her mommy. Then, things get more confusing with her aunt/sister and uncles/brothers. The family, however, has made it clear Chloe understands the situation. And, she has the freedom to give them the labels she’s most comfortable with.

So, do you agree with the powerful quote Savannah shared on Instagram? Do you wish you could enjoy donuts with Savannah and Chloe? Share your thoughts with us in the comments.