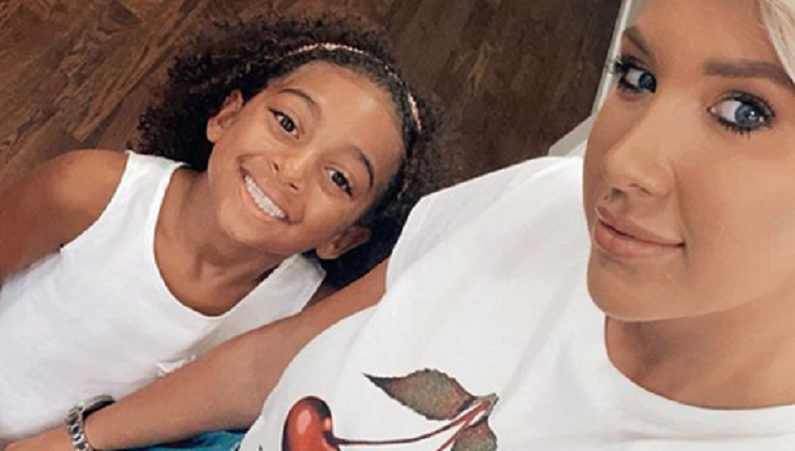 Savannah Chrisley shared some insightful thoughts on racism. The Growing Up Chrisley star feels that it’s her responsibility to defend her biracial niece Chloe. She wants to protect the 7-year-old from discrimination and racism, but it’s not always easy.

Every time she goes out with her niece, she notices the looks she gets from people. Savannah says that she’s disappointed by the hate that she sees in public. In a raw and candid interview with People, she also acknowledged her white privilege. Savannah wants to learn about racism and privilege, so she can continue having conversations about it.

This comes amid the nationwide Black Lives Matter protests.

A WHOLE LOT of sass in one photo hahah #mygirls 💕

The Chrisley Knows Best star had an in-depth conversation with People about racism and white privilege. Savanna Chrisley says she deals with “judgment” every time she goes out with Chloe. It’s a situation that “should not be happening in 2020.”

“I take Chloe out with me and we’ll go get our nails done or we’ll go have lunch and we’ll just have a day to ourselves and the looks that I get from people – it’s just devastating,” Savannah admitted.

Chloe is the daughter of Savannah’s oldest brother, Kyle. The Chrisley family took her in and helped raise her. She even makes an appearance on the USA shows, Chrisley Knows Best and Growing Up Chrisley. In the interview, Savannah feels that it’s her “duty” to stand up for her biracial niece.

“It’s my duty to stand up for Chloe and for people and all young girls and women and people of color,” Savannah explained. “It’s not enough to say you’re not racist.”

The reality star wants to join the fight against racial injustice. She wants to learn more about race and racism. Savannah and her family want to match their words with actions. The 22-year-old also makes sure to have more conversations with other women of color.

“So, I think that’s what we as a family are trying to do – trying to put action behind it and just learning because you have to take a second to talk to people,” Savannah continued. “That’s one of the best things I’ve done, just have conversations with friends who are of color just to hear their points of view and how they’re feeling.”

That’s not all. She also acknowledged her own privilege.

Savannah Chrisley says it’s important for Chloe to know where she comes from. She even makes time to reflect on her white privilege, including the opportunities she received in her life compared to Black women her age. In the same breath, she showed support for the BLM movement.

“Chloe is biracial and she needs to know both sides of her family and where she comes from,” Savannah said. “The whole Black Lives Matter movement should have been something that happened a long time ago and it makes me so sad to see that racism is still alive.”

Savannah understands that she’s a “privileged white woman.” But she thinks other white people don’t recognize their own privilege. She feels it’s a conversation that people should be having.

“There are a lot of things I haven’t had to deal with, certain hardships and adversities and it’s truly so sad that skin color can either make your life easier or harder,” Savannah added.