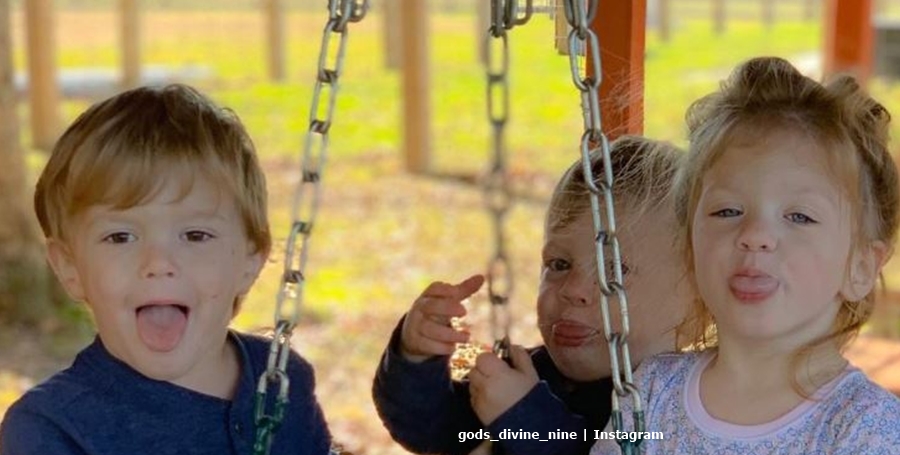 Sweet Home Sextuplets mom Courtney seldom has a dull moment with her little kids. Especially with Blu who gets into everything all the time. But now that she needed to go somewhere, the kids fell fast asleep. What can she do in that situation? After all, waking up toddlers might cause a lot of tears, tantrums, and even screaming.

We reported that with Blu, Courtney and Eric never suffer a dull moment. The tiny little TLC star really keeps everyone on their toes. He loves climbing on things and always seems to sport a few boo-boos. If he’s not teetering on a laundry basket on the couch, he’s climbing on the kitchen counter or up the banisters. But now, Courtney ran into a problem. Instead of being active, most of the kids fell asleep just when she wanted them awake.

Taking to her Instagram on January 6, the Sweet Home Sextuplets mom revealed some of the kids passed out on the couch. And one of them was partly underneath it. She wrote, “Ok everybody…load up!!!! Let’s go get big boys from school!!!🤪🤦‍♀️🤪 Why do they always fall asleep right when I’m about to load them up!!” But, only two of the babies were actually awake at the time. So, fans commiserated with her in the comments section.

Maybe Blu was one of the two kids still awake. It’s hard to make out the kids clearly. After all, the one half under the couch is face down and so were two on the couch. Fans guessed the one under the couch might be Rivers because of the long hair. One fan wrote, “Who’s that under the couch? I’m guessing Rivers by all of that hair!! 😍”

Another Sweet Home Sextuplets fan said, “Too funny especially sleeping half way under the couch.”

Then, this comment came in: ” I love this about toddlers… they are tired so they sleep wherever they are. Half on the couch cool.. half under the couch cool!!! Lol my son is the same way.. so cute!!! 💙”

One follower t0ld Courtney, “Oh your lil ones keep me with a warm heart full if smiles .. they are so adorable 😍.”

Sleepingshouldbeeasy.com notes that when the kids fall asleep, it sounds ideal. Until it’s not convenient. Waking them up might lead to crying, a bad temper, and even tantrums. No doubt, that’s the last thing Courtney wants. The outlet recommends never waking them suddenly unless you want “crying and screaming.” It might be easier to lightly comb their hair and wake them that way with a “gentle disturbance.”

Maybe the Sweet Home Sextuplets mom tries something similar. The outlet also suggests that once the kids start waking to speak to them in low and quiet tones. Hopefully, Courtney got all the uncooperative kids awake in time to collect the older boys without any tantrums.

Savannah Chrisley Under Fire For Catching A Shark: Did She Release It?
WHOA! Rachael Kirkconnell Reveals Matt’s Hidden Talent
‘Manifest’ Uncancelled?! NBC & Netflix Reconsider Season 4
What Is Former ‘Counting On’ Stars Josh & Anna Duggar’s Net Worth?
Matt Roloff Shuts Down Accusations Of Being Rich, What’s His Net Worth?