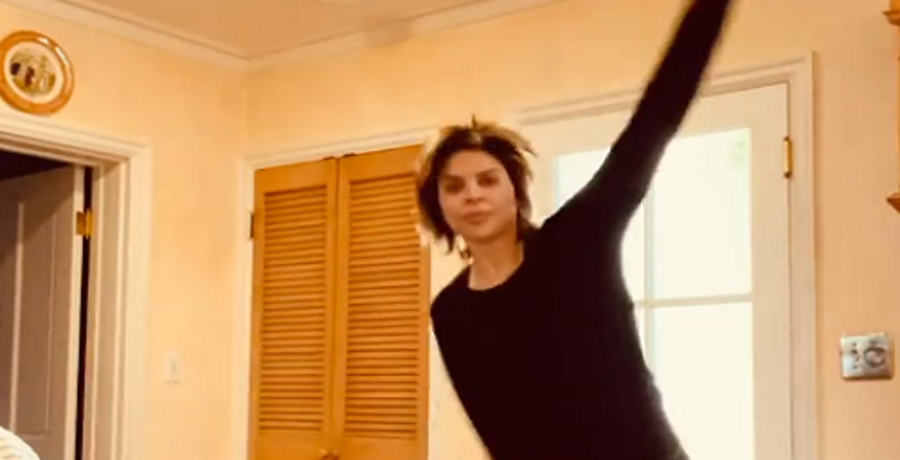 Lisa Rinna is back to dancing. The Real Housewives of Beverly Hills star took to Instagram to share new dancing videos. She busted out some new moves for the new year. But she reminded fans that she’s very much the same person.

However, her latest Instagram post had an important message. The reality star made her fans and followers smile in her latest video. Rinna wore an all-black outfit for the occasion. While some took notice of her dance moves, others took note of the hashtag she used in her caption.

On Tuesday, January 5, Lisa Rinna posted a new dancing video. While she’s known for her oversized lips and owning it, she wanted to share an important message with her fans. The video showed Rinna dancing away in her home. She left her fans dizzy as they watched her moves.

Rinna looked like she just got out of bed. But she was ready to take on the day. The Bravo star sported her signature haircut and pout. She also wore a black long-sleeve shirt with matching leggings. She danced away to Harry Styles’ song “Treat People With Kindness,” which was also the message of her post.

“New moves who dis?” Lisa Rinna captioned the post. She also included the hashtag of the song title. It’s an interesting choice consider Rinna isn’t known for being nice. Viewers previously called her out for her “mean girl” attitude on previous seasons of The Real Housewives of Beverly Hills.

The outspoken television personality has gotten into her share of feuds. RHOBH Season 10 was focused on her fallout with former friend Denise Richards. Rinna has also gotten into it with RHOBH alum Lisa Vanderpump. However, she received a lot of positive comments on her latest post.

The Real Housewives of Beverly Hills star had hearts racing when she used her husband Harry Hamlin as a prop in a previous dance video. This time, she used the Bee Gees 1977 hit “Staying’ Alive” as the soundtrack. Lisa Rinna busted out some of her disco moves for this video.

She wore a black tank top with black-and-white graphic print yoga pants. She showed off her incredible body in the film. Meanwhile, Harry Hamlin was busy reading as she danced away. So, Rinna walked over his crossed legs and continued on dancing.

Most of the fans commented on Harry’s reaction – or lack thereof.

“Harry’s level of unbothered is inspiring,” one wrote. “Haha I love how Harry just sits there and reads his book,” another added.

Rinna’s Instagram video received over 74,000 likes in just a few days. Some fans think she should get on TikTok stat. What are your thoughts on her new dancing videos? Sound off below in the comments.