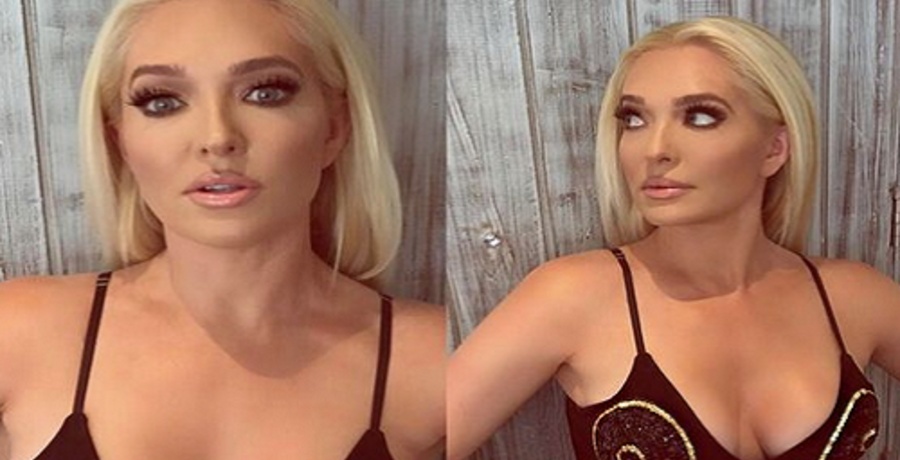 Erika Jayne moved forward with the launch of her Pretty Mess merchandise. Since the creditors froze her estranged husband’s assets, she has to find a way to lavish her own lifestyle. A law firm accused the couple of embezzling funds meant for plane crash victims. As a result, Erika couldn’t sell her designer duds.

Tom Girardi is at risk of losing money. He could also lose his career and professional reputation as an attorney. Rumors are swirling that he is broke amid the embezzlement case. If the allegations turn out true, Erika Jayne will have to find a way to secure her bag.

She’s no longer spending $40,000 a month for her glam life. So, she launched her Pretty Mess merchandise on her official website on Monday, January 4. Fans can purchase a Pretty Mess T-shirt, which features her iconic graffiti style, as seen on the cover of her biography. The long-sleeve T-shirt costs $35.00.

There are other featured projects like a Pretty Mess robe, hooded sweatshirt, or short-sleeve tees. Prices range from $25.00 to $35.00, which is reasonable for celebrity merchandise. Erika has not announced this news on social media. But both the bathrobe and hooded sweatshirt are currently sold out.

Last month, a Chicago law firm ordered The Real Housewives of Beverly Hills star to stop selling her designer clothing. This comes amid the effort to recover $2 million in missing funds owed to people who lost loved ones in the Lion Air Flight 610 crash in 2018. The court order also said that Erika Jayne must deposit any funds made from her clothing sales.

The reality star previously announced she was selling her clothes on the app Vestiaire Collective. Erika listed many of the previously worn items for sale. At the time, she gave a slight discount on each item. She wore most of the clothes on the Bravo show or during public events.

Bravo fans continue to call for her firing

Erika Jayne is trying to support herself. She returned to Season 11 of The Real Housewives of Beverly Hills. But fans are calling for her firing amid the allegations.

“Why has #bravotv not fired Erika Jayne?” one fan tweeted. “She and her now ex-husband have stolen tons of cash from victims! Tons! Hey @BravoTV and @Andy do you condone this type of behavior or will the network do what’s right? #Bravo needs to fire her now!! #RHOBH”

“We ain’t forget. You should be fired. FEDERAL PRISON,” another fan added.

How can @BravoTV justify hiring @erikajayne for #rhobh she is a coldhearted #MeanGirl who steals money from widows & orphans. Seriously @Andy she needs to be fired regardless if it is in the middle of filming the season.

The posts on Twitter go on and on. Erika has kept quiet amid the embezzlement case. It’s everybody’s guess if she will address the drama on the new season. The Real Housewives of Beverly Hills Season 11 should premiere on Bravo sometime this spring.