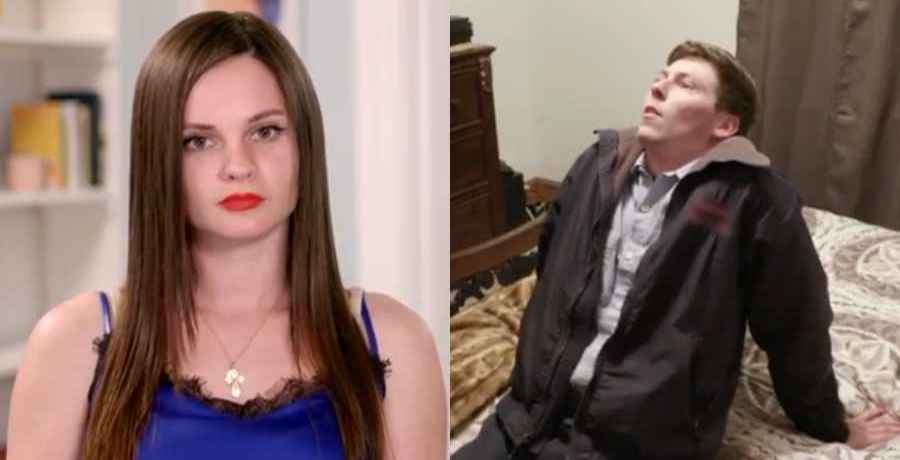 90 Day Fiance fans have been speaking up about the breeding of German Shepherds on Brandon Gibbs’ Hummingbird Acres Farm. However, Brandon’s Russian girlfriend, Julia Thrubkina stood up for his family, saying the dogs “live better than many people.” What is it that has raised fans’ hackles over the handling of the canines?

90 Day Fiance stars Julia and Brandon and the dogs

At the start of Season 8 of 90 Day Fiance, fans were concerned whether Julia Trubkina would be able to handle her new American life on Brandon Gibbs’ farm. Brandon’s parents, Ron and Betty Gibbs have been criticized for their strict house rules and talk of contraception. However, the conversation seems to have shifted entirely.

Nowadays, fans have started calling out Brandon’s family and their farm, Hummingbird Acres, over its dog breeding. What caused this criticism and why did even Julia try to justify the breeding of the German Shepherds?

Brandon works as a pest control technician in Dinwiddie and met Russian-born Julia via a friend in Moscow. His friend set up the couple via a video call. It was love at first sight for Brandon, 27, who soon got engaged to Julia, 26, in Iceland. He then organized to take her home to the farm in Virginia on a K-1 visa.

Staying with his parents on the farm is difficult for the couple, but Brandon had spent most of his money on Julia. This gave the 90 Day Fiance stars no other option but to stay on Hummingbird Farm. All this, while his overprotective parents are always on the prowl, making sure they behave.

German shepherd breeding on the farm

During the introduction of Julia and Brandon on the TLC reality show, fans first got a glimpse of Brandon’s parents’ farm life. This includes tending to lambs, pigs and poultry, as well as looking after caged German Shepherd dogs. It is the dog breeding aspect that has upset 90 Day Fiance fans.

Many TLC viewers immediately lost interest in Julia and Brandon’s storyline after realizing his family breeds dogs. One tweet from an angry fan read, “Brandon’s parents are dog breeders? That’s an automatic strike against his storyline for me. #AdoptDontShop”

Another Twitter user wrote to remind the 90 Day Fiance family that “RESPONSIBLE dog breeders don’t keep their dogs in outdoor cages with dogloos.” The fan added that Brandon’s parents were running a puppy mill.

A number of comments to that tweet agree, saying this bothered them too. That fan said they wondered why the dogs weren’t able to move freely in the yard. Eventually, it dawned on them that they are used to breed. They wrote that they can’t stand breeders who treat their dogs like that. Another 90 Day Fiance fan agreed, writing that they have zero respect for the family. They hate people who treat dogs like that.

Exactly! When the father says, All this is going to be yours one day! I kind of wished he fell off the landing for running a puppy mill. Did the the producers of 90 days just over look this or are they ok with it?

Another fan agreed, mentioning the Gibbs father saying that one day, the farm would be theirs. They asked if the TLC producers overlooked this fact, or whether they are OK with it.

The original poster did add in a further tweet that unfortunately, what the Gibbs family are doing isn’t illegal. Reportedly, the dogs are classified as livestock by the USDA and the shelter they provide for the animals is considered adequate. However, they wrote that these regulations were created 70 years ago and do not keep up with the times. They also pointed out that German Shepherds are “super-intelligent working dogs” that need social interaction. They further need mental and physical stimulation, which these dogs are not getting in those cages.

Meanwhile, Brandon’s future wife, Julia defends the family, saying the dogs live better than many people. She told her Instagram followers to close the topic once and for all and to not make up stories. According to Julia, the dogs are watched by two people, “24 hours a day.” The 90 Day Fiance star added that the dogs are walked three times a day, or sometimes more. Trubkina said that on top of this, the dogs are brushed, fed, trained and played with regularly.

As noted by Screen Rant, while it sounds like Julia might now be comfortable living with Brandon’s family, fans are still not happy. While the 90 Day Fiance star has now made her Instagram profile private, one fan did still comment on a post. They wrote that dogs should not be in a cell, but should be able to go in the backyard and run.

Readers, do you agree with fans about the Gibbs’ family’s treatment of their German Shepherds? Let us know in the comment section below.

Jon Gosselin Reveals He Was In Hospital, Shares Details
Jill Dillard Fans Gush Over Derick’s Throwback Photos
‘Young and the Restless’ Exciting Plotline Spoilers For The Next 2 Weeks
‘Sister Wives’: Does Christine Brown Look Like A Man In This Photo?
How Do ’90 Day Fiance’ Stars Loren And Alexei Brovarnik Make A Living?