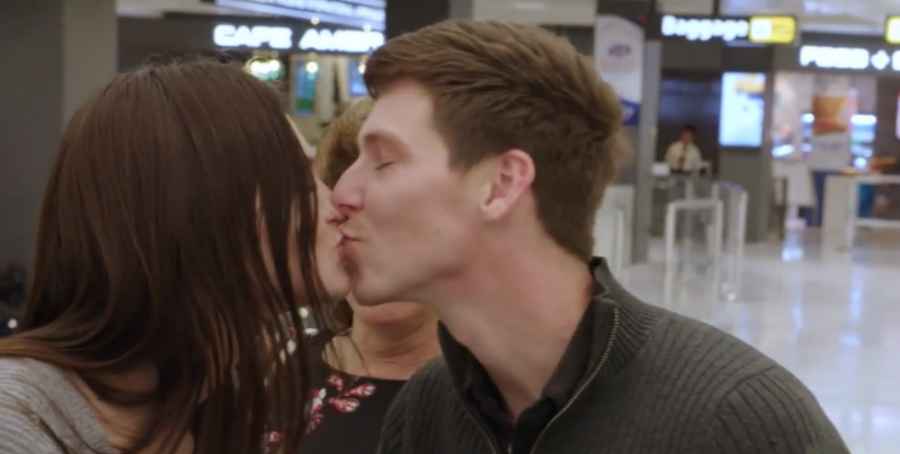 Fans will remember how badly things go when a parent interferes with a 90 Day Fiance relationship. Colt Johnson’s mom, Debbie, comes to mind, ruining his relationship with at least two women. Meanwhile, on the Season 8 premiere of the TLC reality show, Brandon’s parents made things truly uncomfortable. They wanted to know if their son was practicing safe s*x with his lovely Russian fiance, Julia.

Brandon and Julia on 90 Day Fiance

Brandon met Julia, a go-go dancer, through his best friend and instantly fell in love with her. In the following weeks, he flew out to Russia to meet her, asking her to be his girlfriend. Brandon then proposed to Julia in Iceland after they had been together for five months.

The new TLC reality star has invested a great deal of money into his relationship with Julia. For that reason, they will be staying with his parents on his family’s Virginia farm. However, problems are already cropping up for the couple, before she even gets to the United States.

Brandon and his parents

On Sunday’s episode of 90 Day Fiancé, Brandon and his parents are getting ready for Julia’s arrival from Russia. At first, the couple will stay with his parents during her visit. However, they will also get some alone time on a trip to Washington, DC. This aspect worried Brandon’s parents no end. They know that Brandon, 27, and Julia, 26, will stay in their own hotel room on their weekend getaway.

The family apparently is concerned the pair will get pregnant right away. Brandon’s mom Betty asked him whether Julia uses birth control. He replies to his mom, saying, “Yea, no, she’s not.” When his mom questioned whether his girlfriend didn’t want to be on birth control, Brandon explained that she has no interest. Even so, his mom volunteered to help Julia in the process, saying she was “happy” to take her to visit a doctor. However, she did add that she guesses they could do “other things” to ensure Julia doesn’t fall pregnant.

Brandon responded to his mom, saying he didn’t want to “take on that kind of responsibility,” which made his parents question what he means. He responded, shocking his parents by saying, “I guess we are not being safe.”

In his confessional, Brandon explained that he had brought up the subject of birth control several times to Julia. However, each time, she quickly shuts it down. Julia is apparently “funny about putting medications in her body at all.” This means for Brandon and Julia, birth control is not an option.

Producers asked Brandon what is wrong with using condoms. He responded, saying there is nothing wrong with condoms, but “they’re definitely not as fun.” However, his mom advised her son to not take chances he shouldn’t take. Meanwhile, Brandon agreed to differ, saying they have it under control.

In her own confessional, Betty said  that she believes the couple’s avoidance of birth control is an “accident waiting to happen.” As noted by Us Weekly, she truly wants Brandon to do things responsibly from now on. Good luck with that.

Fans can follow Brandon and Julia’s story on 90 Day Fiancé on TLC Sundays at 8 pm ET.