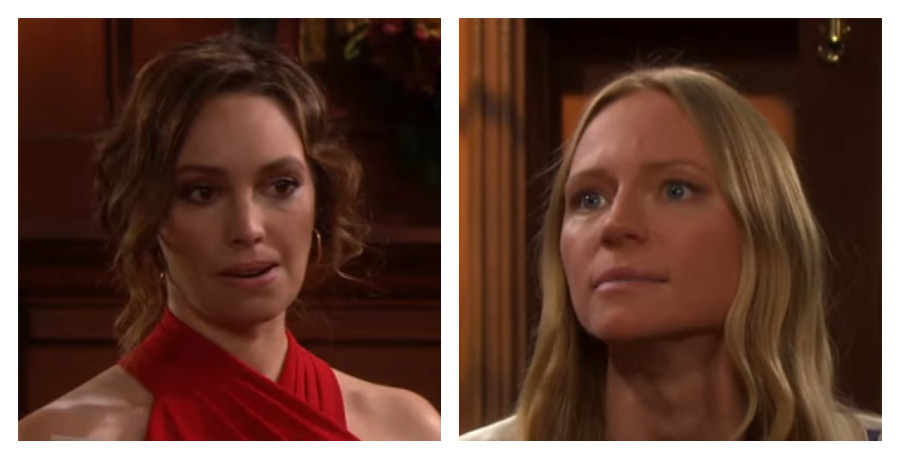 Days of Our Lives is kicking the new year off with a bang. Abby quickly finds out about her husband’s New Year’s Eve dalliance with Gwen. Eli and Lani have a crisis with their twin newborn babies. Allie finally remembers who really raped her.

What happens in Salem in the first week of 2021?

Gwen (Emily O’Brien) has been trying to dig her claws into Chad (Billy Flynn) for months now. The British beauty has a vendetta against Abby (Marci Miller) and the Deveraux family. Around Christmas, Gwen found her way under the mistletoe to sneak a kiss with Chad. But that wasn’t enough for her.

Gwen schemed to convince Chad that Abby was cheating on him with Jake (Brandon Barash.) As a result, a drunken Chad found solace in bed with Gwen on New Year’s Eve, thinking Abby was with Jake.

In the weekly promo video, Abby confronts Gwen, telling nemesis to stay away from her family. Any seasoned soap fan can predict that Gwen will wind up pregnant from the one-night romp.

Hopefully in the new year, DOOL will finally explain the source of Gwen’s hatred for the Deveraux family.

Who Raped Allie on DOOL?

DOOL fans have been divided over Allie’s (Lindsay Arnold) rape storyline. She has spent months pinning the rape on Tripp (Lucas Adams,) but soap fans always expect a twist. This week Allie will undergo hypnosis and remember the event surrounding her rape. In fact, her memory will clear Tripp and put the blame where it belongs, on Charlie (Mike Manning.)

As fans suspected, Tripp and Charlie are half-brothers, which explains why Tripp’s DNA matched Allie’s baby.

When the pieces come together for Allie, her cousin Clare (Isabel Durant) is about to consummate her relationship with Charlie. Will Ben (Robert Scott Wilson) be able to stop her in time? And will she believe that her new man is a rapist?

Lani’s (Sal Stowers) journey to bring her twin babies into the world wasn’t an easy one. In fact, her marriage to Eli (Lamon Archey) was on the brink of divorce until the birth of the babies brought them back together.

Unfortunately, it isn’t smooth sailing for the couple. The babies go missing from the hospital nursery. Who could be responsible for kidnapping the twins?

Chad isn’t the only one in trouble for a New Year’s Eve encounter. Brady (Eric Martsolf) attended a New Year’s Eve party with his ex, Chloe (Nadia Bjorlin.) The former couple shared a friendly kiss to welcome in the new year. The kiss was harmless, or so they thought.

It turns out the liplock was caught by the Spectator newspaper and blasted on the front page for all to see…including Kristen (Stacy Haiduk.) Spoilers indicate that things aren’t pleasant between Brady and Kristen when he visits her in prison. He has a lot of explaining to do.

Are you looking forward to a new year of drama in Salem?