Now, if you recognized the photo shared on the TV show’s official Instagram account yesterday, you aren’t going crazy. This is an old, but wonderful picture of the reality TV father and daughter.

The photo features Savannah standing next to her father Todd Chrisley. He has his arm wrapped over her shoulders. Savannah has one hand holding onto her jacket. Their second arms are bent with their palms out and their hands in front of them as they pursed their lips and blew kisses for the camera. Now, this was clear a snap from a photoshoot. But, the photo seemed perfect with the caption of kissing the year 2020 goodbye. And, that is just what many Chrisley Knows Best fans agreed they wanted to do.

Todd and his daughter Savannah both looked incredible in the photo. Todd looks like he hasn’t aged a day. And, Savannah’s hair was starting to grow back in after she cut it shockingly short last year. Savannah rocked a pair of dark blue jeans that hugged her form in all the right places. She paired it with a lavender colored shirt and a pink leather jacket pulled over top. 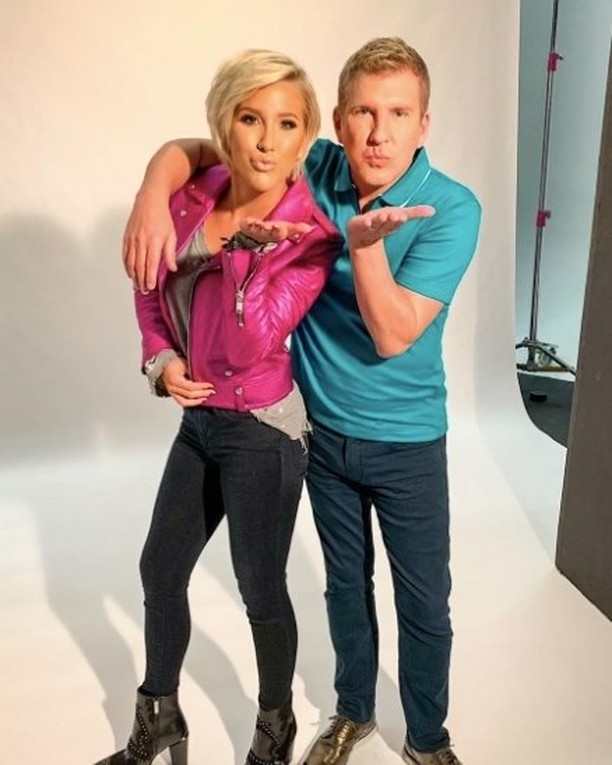 Her father Todd Chrisley was also looking incredible in a pair of snug blue jeans. His were a little more vibrant of a blue compared to his daughters. He also had a gorgeous blue short sleeve shirt.

The photo just oozed incredible vibes. Chrisley Knows Best fans agreed you could just feel the incredible father and daughter relationship these two have from the photo.

Fans react to the photo of Todd and Savannah Chrisley

The sweet photo was liked 15,000 times with nearly 200 comments. Many opted to wish the Chrisley family Happy New Year. And, to gush about how much they loved this reality TV family. Others agreed they were more than ready to kiss the year 2020 goodbye.

Overall, there really didn’t seem to be much negativity anywhere in the comments of the post. And, this was something fans of the Chrisley Knows Best stars found comforting.

So, did you join Todd and Savanna in kissing the year 2020 goodbye? Do you have a bucket list for 2021 like his other daughter Lindsie does? Share your thoughts with us in the comments. Likewise, stick with us at Tv Shows Ace for the latest Chrisley related news.

‘Below Deck Sailing Yacht’: Alli Gets Emotional During Season 2 Reunion
Kourtney Kardashian Keeps Distance From Amelia Gray Hamlin
Is Kourtney Kardashian Considering Taking Back Scott Disick?
TLC’s New ‘Filth Fighter’ May Give ‘Hoarders’ A Run For Their Money
A Big Duggar Announcement Could Be Coming Soon – What Is It?