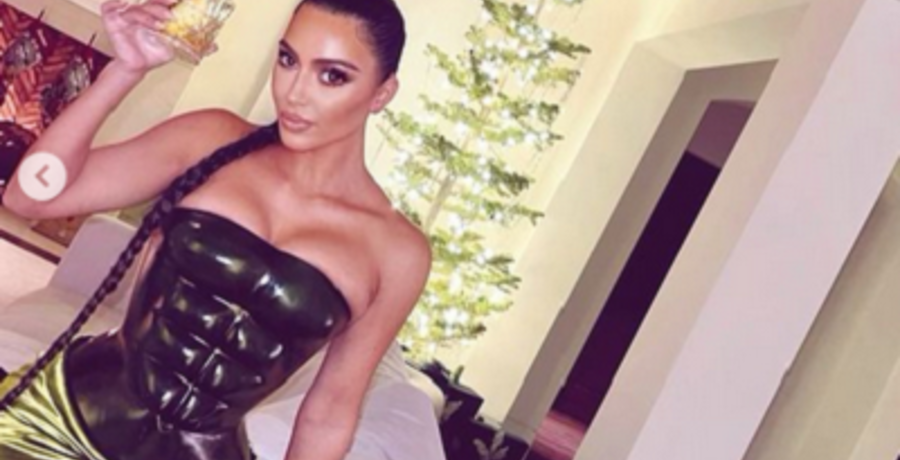 The KUWTK stars posed for sexy photos. Kim Kardashian and Kylie Jenner swapped Christmas roles. TV Shows Ace reported Kim’s nearly-nude dress. It turns out she was the sexy version of the Grinch. Kylie previously channeled the Grinch last month. But she decided to dress up as sexy Santa Claus. Check out their stunning outfits below.

The Keeping Up With the Kardashians stars posed for several photos. Kim Kardashian and Kylie Jenner made a rare appearance together. Kylie didn’t attend Kim’s 40th birthday getaway earlier this year. And she wasn’t in Kim’s latest group photo in Lake Tahoe. So, it’s nice to see the two famous sisters together for Christmas.

“Merry Christmas from The Grinch 💚 and Santa ❤️,” Kim captioned the hot photos.

Kim wore her ab-tastic green armor bodice with a long velvet skirt that featured a high slit. She paired it with a long braid, oversized earrings, and clear pumps. Meanwhile, Kylie wore a red sequin gown that hugged her curves. She also wore her natural short hair that she recently dyed red. She paired her look with matching red pointed-toe kitten heels.

Per The Blast, Kim shared plenty of other photos from their private celebration. She even gave a shoutout to the designer of her outfit, Daniel Roseberry. The family spent Christmas Eve at Kourtney Kardashian’s house this year. This comes after the family canceled their iconic Christmas Eve bash for the first in over 30 years.

Kylie Jenner perfected the sexy Grinch look in her previous Instagram photos. This time, Kim Kardashian wanted to give it a try. But some fans think she gets a D- for effort. Some followers compared her to the Hulk, while others thought she looked like one of the Teenage Mutant Ninja Turtles. Here are some of the comments on her Instagram page:

Fans lost it when Kim had to wrangle her children in one of her videos. She’s been left alone with her four children, North, 7, Saint, 5, Chicago, 2, and Psalm, 1. Her husband, Kanye West, was spotted in Europe this week. Reports surfaced about the couple’s supposed marital problems.

The rapper also didn’t attend the family’s trip to Lake Tahoe. It could be the reason why Kim channeled the grumpy cartoon character. The couple is reportedly living separate lives while remaining married.

What are your thoughts on Kim’s Christmas Eve look? Sound off below.