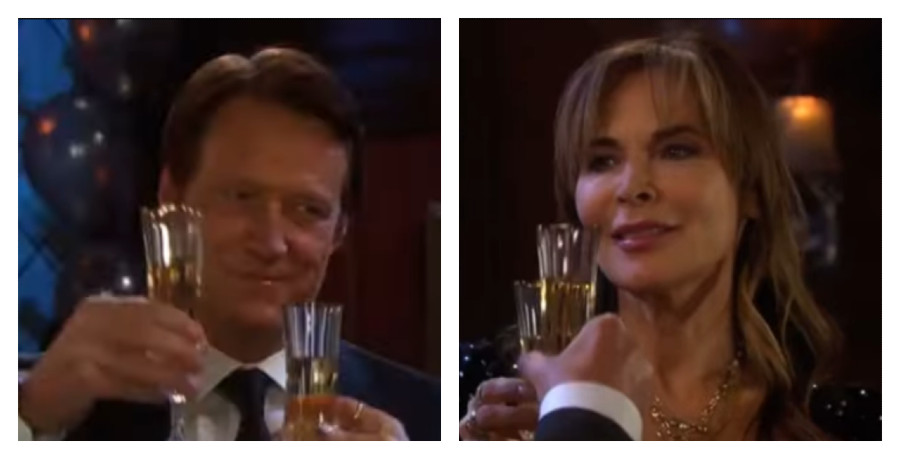 New Year’s Eve on Days of Our Lives is a big deal. Two years ago, Jennifer (then-Melissa Reeves) got the shock of her life when a presumed dead Jack (Matthew Ashford) showed up to the party. It was an even bigger shock that he was on Eve’s (Kassie DePaiva) arm.

As Salem rings in the new year, Jack and Jennifer (now-Cady McClain) remain estranged. Will the fan-favorite couple get a new beginning in the new year?

What can fans expect on DOOL this week?

John and Steve Bury the Hatchet, Team Up to Help Tripp

John (Drake Hogestyn) and Steve (Stephen Nichols) are on the outs. Steve’s son Tripp (Lucas Adams) stands accused of raping Allie (Lindsay Arnold,) John’s granddaughter. Steve is adamant that his son is innocent. John doubts it, but is willing to help Steve investigate.

This week the two make amends and set off to find out if Tripp did rape Allie. Steve speculates that the crime was committed by a close relative of Tripp’s. It seems that fan speculation of Charlie (Mike Manning) being Tripp’s half-brother – and the rapist- is likely true.

DOOL’s Jennifer is having a hard time forgiving Jack for his indiscretion. She learned recently that while she was in a coma, he sought comfort in Kate’s (Lauren Koslow) bed. It seems that Gwen (Emily O’Brien) has a vendetta against the Deveraux family. She will do anything to make them suffer. In fact, she planted seeds in Jennifer’s mind that Kate and Jack were more than a one-time thing.

However, Kate finally takes the hit and tells Jennifer the truth. The person she is bedding is Jake (Brandon Barash.) Spoilers indicate that all of Salem gets wind of Kate’s secret, causing problems between her and Jake.

Now that she knows the truth, is Jennifer ready to forgive Jack?

Gwen’s target also includes Abby (Marci Miller.) The schemer is doing her best to seduce Abby’s husband Chad (Billy Flynn.) Part of her plan includes convincing Chad that Abby is cheating on him with Jake. As mentioned, Jake is sleeping with Kate, not Abby.

However, this week Gwen lures Chad to a hotel with alcohol flowing. Will the two end up locking lips and maybe more?

Meanwhile, across town, Chloe (Nadja Bjorlin) is caught between her two ex-lovers Brady (Eric Martsolf) and Philip (Jay Kenneth Johnson) She sets tongues wagging by showing up to the New Year’s Eve party with one of her former flames.

Will Chloe rekindle a past romance?

In real-life news, DOOL star Camila Banus (Gabi) shared some happy news with her fans earlier this week. She posted a video telling her social media followers that her long-time boyfriend popped the question. She is engaged to be married!

In addition to the video, she shared a cute snap with her new fiance. In the caption, she exclaimed, “Imma be his wifeeee.” Many of her DOOL co-stars jumped in the comment section to share their congratulations.

Drop your congrats for Camila Banus in the comments down below. DOOL has some pretty exciting things in store for 2021, including a Vivian recast.