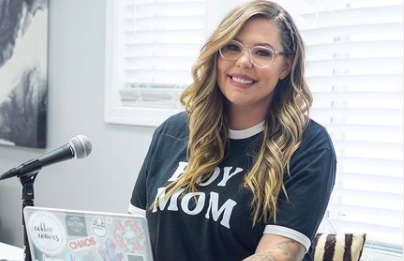 The constant baby daddy drama may have become too much for Kailyn Lowry on a certain social media platform. It seems she deleted her Twitter account after the drama that unfolded on the latest episode of Teen Mom 2.

Kailyn Lowry and Javi are back at it

It appears the Teen Mom 2 star Kailyn Lowry has deactivated her Twitter account for the time being. According to InTouch Weekly, the social media account deactivation came as a direct result of drama between her, baby daddy Javi Marroquin, and Lauren Comeau. Deleting her Twitter must have been a difficult decision as she had an astounding 1.3 million followers. But, no need to worry if you love to keep up with her life as she is still on Instagram. Phew!

On the latest episode of Teen Mom 2, which aired Tuesday, December 22, Kailyn revealed that Javi had been contacting her non-stop because he was angry that she talked about a past situation that happened back in October. Javi blamed Kailyn Lowry for causing major animosity and tension between him and Lauren.

Kailyn went on to say, “Lauren is probably a nice girl. It’s not her fault. I wish that I never did that, but it’s not my f–king responsibility. Don’t do things if you don’t want them to [air on TV].” However, she went on to say if he ever did something in the future she probably will just keep it to herself because she does not want to deal with the drama again.

Now, what situation was Kailyn Lowry referring to?

Javi came on to Kailyn Back in October

The tension between the three of them has been hot and heavy ever since October 2020. Basically, Kailyn claims that Javi essentially tried to meet up with her and asked her to have s*x with him while he was still in a relationship with Lauren. Of course, he tried to deny it, but Kailyn says she has all the messages to prove it.

Allegedly, the situation went down with Javi pulling into the Wawa parking when Kailyn was getting gas. She went on to say he simply opened his car door and said, “I want to f–k you, plain and simple.” Kailyn went on to say she denied him. The drama between the pair never seems to end.

Kailyn has tried to apologize

Finally, according to InTouch Weekly, Kailyn Lowry apologized to Lauren via a Twitter statement on October 13. Kailyn wrote, “She didn’t deserve the humiliation she was put through due to a situation between Javi [and] me. I’ve been in her shoes and I’ve felt that pain, however, have never experienced that being exploited on TV. I did have a private conversation with her, but owe her a public apology as well.”

Even in spite of her attempts to make amends, it seems Lauren and Javi are still quite upset with having their issues being broadcasted to the world.

What do you think of Kailyn Lowry deleting her Twitter account? Was it mature of her or is she just hiding? Let us know what you think in the comments below. Be sure to watch new episodes of Teen Mom 2 on MTV Tuesdays at 8 PM E.T.