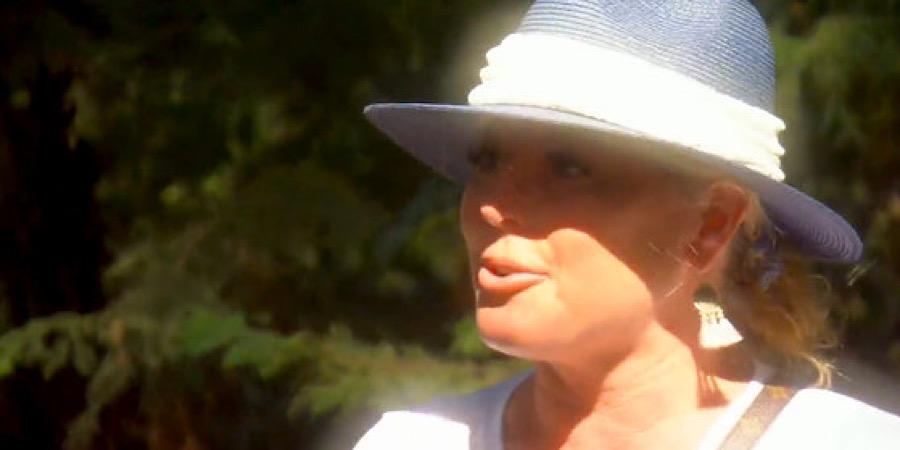 When we last left the RHOC, four of the ladies were in Lake Arrowhead. But, Braunwyn struggled to say sober. She  got frustrated when she could not get in touch with husband, Sean right away, per their agreement. Back in the OC, Shannon’s daughters were quarantined away from her. The three girls were recovering from Covid. At the same time, Emily had tested positive. Yet, it was husband, Shane, with the symptoms and negative test. It ended with him in the hospital.

The ladies are still in Arrowhead and are excited to have an active day. But, with Braunwyn at a hotel, it gives the other women a chance to gossip about her. They are mocking everything she has done and said. While at the hotel, she is talking to a friend on the phone. She says how hard it is to be sober on the trip. Braunwyn recounts walking into the Arrowhead house and seeing it lined with alcohol. That was a trigger. Back in the OC, Emily gets to FaceTime with Shane. He is on oxygen and seeing him so sick has taught her how much she loves him. He can finally bathe himself so he feels so much better.

In the Arrowhead house, Elizabeth is being a tad more revealing about her past. She says her dad was a preacher and this is what they wanted her to be. The ladies are all baffled by Kelly’s masks she wears. One is sheer and the other has a zipper where the mouth should be. Gina says she does not even want to know what goes on in her bedroom. Braunwyn has come to the house and wants to call Shannon. Shannon says she feels achy but does not have her Covid test results yet. A producer asks Shannon if she knows what FOMO means. Eventually, she says she does.

Shannon thinks no one really cares if she is there because only Braunwyn has called her. Gina takes a call from her lawyer regarding her ex’s case. He has been charged with two felonies. She wants to protect him from going away for over four years but she can’t.

Braunwyn decides it is time for her and Elizabeth to chat. Emily had told Elizabeth that Braunwyn looked her up and saw docs about her home. Emily should have kept her mouth shut but she did not. The two women go at each other. Elizabeth starts going in circles; Braunwyn will come back with another lie their new “friend” has said. Elizabeth breaks down and says she doesn’t trust women. This is a mess. Gina missed the whole fight because she was on the phone with her boyfriend, updating him on the trial.

Braunwyn says she won’t betray Elizabeth and thanks her. Gina comes downstairs and Kelly tells her she should give Matt mercy. Why? So he can still provide for the kids. In her confessional, Elizabeth says Kelly should just shut her mouth. Braunwyn admits she did look up Elizabeth’s papers because she was bored in quarantine and Elizabeth is shocked she is so honest. But, Braunwyn does throw Shannon under the bus and say she got into her head. This prompted her to start poking around. It never ends.

Shannon Has Covid on RHOC

Shannon officially has Covid. She is fired up because she has compromised lungs and her kids were the ones who went to a party, bringing it home. Shannon is crying to her mom and says she is worried about her future with John. She knows they have had ups and downs; he believes he will test positive soon enough. While the ladies are ax-throwing in Arrowhead, Shannon calls her kids to tell them her results. They reassure her but she says she has lung damage and is supposed to be on vacation.

The girls remind her they do not know who brought the virus into the home. She is mad they are not showing more emotion. Over at Emily’s, she is trying to take care of her kids. It is hard to tell them to stay six feet away. As for Shane, they may keep him in the hospital for five days on an anti-viral med. In Arrowhead. Elizabeth and Braunwyn are bonding and trying to re-establish something positive.

Elizabeth tells Braunwyn she was raised in a very religious situation and she is not ready to tell anyone. Brauwnyn says she won’t share it if she does not want her to. Elizabeth’s mom was able to get them out and still has PTSD from it and she still needs help. Turns out, she was in a cult growing up. She was beaten so badly growing up, it scares her to this day. Elizabeth begins to have a panic attack. Braunwyn is the perfect person to be there at this moment. To be continued.

Next week on the RHOC, the ladies are alerted they need to be tested for Covid. Sean is finally released from the hospital. Shannon sees her daughters have been lazy. Elizabeth opens up about her past. And Braunwyn says Sean is not the one for her. You can catch the RHOC every Wednesday night at 9pm.