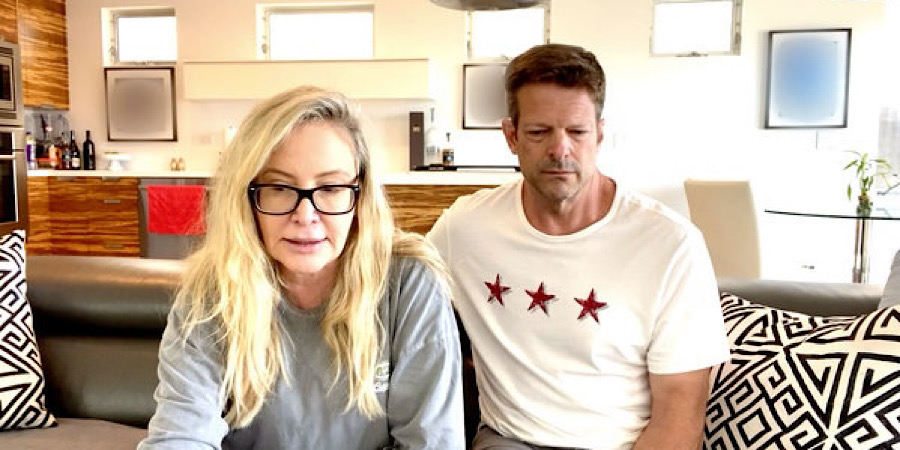 Last week on Bravo’s RHOC, COVID ran rampant in the OC. Shannon’s daughter tested positive while quarantine took its toll on Braunwyn. She is trying to stay sober but it’s so hard. Braunwyn’s trapped with seven kids and a husband she can’t stand. Elizabeth decides to plan a girls trip to Lake Arrowhead but it may all go awry.

Everyone Has COVID; RHOC in Arrowhead

Emily reveals to Kelly she now has Covid. No idea how she got it. Now, husband, Shane is showing signs of having it. Additionally, all three of Shannon’s daughters tested positive. She is freaking out to Braunwyn about possibly having it and being quarantined from her kids. It is very hard for Braunwyn to think about going to Arrowhead with both Emily and Shannon staying behind. But, Emily did tell Elizabeth that Braunwyn was investigating her.

Kelly arrives to the Arrowhead home first followed by Elizabeth. Gina joins them and says this is the one time Shannon can be overly cautious. As Braunwyn is pulling in, the ladies are gossiping about her. They start drinking when Elizabeth pulls out video footage of Braunwyn at a pool party. Everyone was supposed to quarantine to go on this trip. Braunwyn did not listen. No one wants to talk to her when she gets into the home and she does not know why. Gina tells her it’s because she’s been digging up stuff on Elizabeth. It’s a home of mean girls.

Shannon is back in the OC, checking on her girls. She and John will get another test soon. Shannon asks the girls so many invasive questions. She also reminds them of all the vitamins and such to take. They say they do not tell her everything because she worries and panics. She is the woman who wanted to build an entire green home.

Braunwyn Opens Up in Lake Arrowhead; Shane Suffers in the OC

Gina suggests Braunwyn settles in at the house. She soon learns Braunwyn is not staying there with them. Braunwyn goes to bed at ten and does not want to stay up partying. Gina asks how her marriage has been. Braunwyn admits she and Sean have not had sex all throughout Covid. He did not take the kids away, even when he wanted to, because he thought she’d take her life. Gina admitted the vow renewal seemed sterile. When they go out on the lake, Kelly comments Braunwyn was more fun when she was hammered. This offends Braunwyn but she does not say anything back.

In the OC, Emily is exhausted. On top of having Covid, she is taking care of her kids and Shane, who is feeling worse than her. Yet, his test was negative. She is struggling. Emily finally takes Shane to the hospital and she cannot go in with him. His oxygen is low and he is on an IV. Emily is only missing drama in Arrowhead. Braunwyn is surrounded by alcohol but cannot drink. She showed how she has wine in her home because she can’t drink that but almost did. Braunwyn walks outside to try to call Sean but can’t get in touch with him. It’s through one of her kids she gets him. They had a pact he would have his phone always on. She admits this trip is really hard.

Emily is on the phone with Shannon, talking about Shane. He has gallbladder problems and this could be why he was coughing up blood and vomiting. Right now, Emily knows nothing about her husband and she is scared. Luckily, she and Shannon have been there for each other. In Arrowhead, the ladies say they miss Shannon and Emily. But, they are excited to watch Emily’s fiance, Rick on FOX News now that he’s working in Cali. This brings up a whole political conversation.

Gina recalls her arrest. Braunwyn tries to reason with Kelly. It does not work. Elizabeth says she did not understand white privilege until this year. She notes, again, she grew up poor. Elizabeth may still have money woes. The next day, the ladies have a big day. It includes go-karts. But, before Braunwyn leaves, it comes up Elizabeth is upset with her. But, Elizabeth won’t say anything because they were having a good night. Once she’s at the hotel, the ladies question how Sean deals with her. In Gina’s master suite, there’s a bug infestation.

Emily is trying to get in touch with Shane at the hospital. They cannot give her any information. She gets texts from him and he says it’s a fight to live, worse than prison. This is scary and serious. Next week, Elizabeth confronts Braunwyn; Shannon fears John will leave her; and Gina’s ex has been officially charged. You can catch the RHOC Wednesday nights at 9pm only on Bravo.