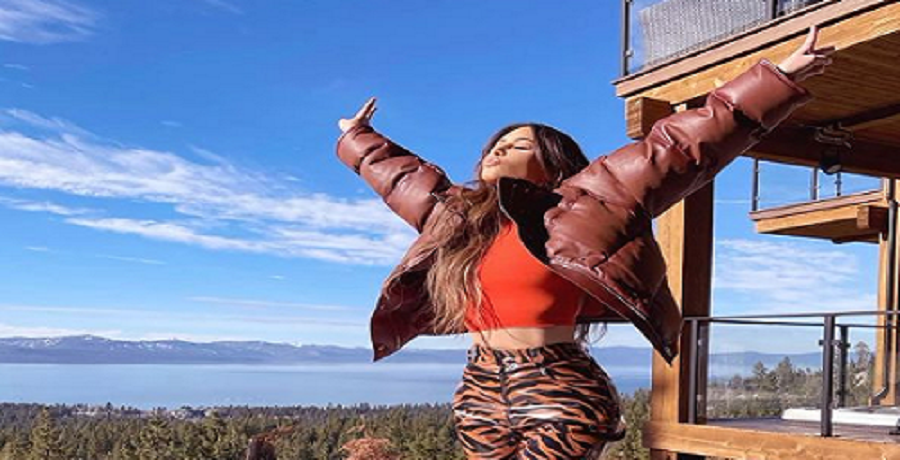 Kim Kardashian wants to “spread the love” this holiday season. And she wants you to have a little holiday cheer in your wallet. Earlier this week, the KUWTK star shocked fans when she announced that she’s giving $500 to 1,000 people. This comes after she got backlash for flaunting her wealth and privilege on social media.

The Kardashian-Jenner clan have been holed up at Lake Tahoe, California. However, it’s not as unpleasant as it sounds. They rented out an estate that reportedly costs $6,000 a night. This comes after Kim told fans she rented out a private island so her close friends and family could “pretend things were normal just for a brief moment in time.”

Now, the reality star wants to pay it forward.

Is Kim Kardashian giving away some of her money?

On Monday, December 21, Kim Kardashian announced on Twitter that she would give away $500 to 1,000 people. That’s $500,000 that she’s giving away. However, it’s not from Kim’s own wallet. She’s giving away the funds through a partnership with Cash App, per Refinery 29. To enter, fans would share their “$cashtag” under the tweet along with the hashtag “#KKWHoliday.”

Since the tweet went live, it received over 309,000 replies. That doesn’t come as a surprise since the nation is in an economic crisis amid the ongoing COVID-19 pandemic. While Kim can certainly afford to pay people $500 each, a spokesperson confirmed that Cash App is the financial provider for this giveaway.

However, this isn’t the first time that celebrities have been generous with money. Rapper Meghan Thee Stallion collaborated with the mobile payment system to give away $1 billion in Bitcoin. Like Kim, she has been slammed for partying and traveling amid the pandemic. It could be that these public figures feel guilty and want to make up for it.

Hey guys! 2020 has been hard and many are worried about paying rent or putting food on their table- I want to spread the love by sending $500 to 1000 people. Send me your $cashtag below with #KKWHoliday 🎄🎁 #partner pic.twitter.com/aHV4COQUvd

Forget the stimulus package. Tweeting out your Cash App or Venmo account with the appropriate hashtags is the new way to pad your wallet this year. Millions of Americans continue to line up at food banks and unemployment office. To ensure that you receive a little extra money, make sure to take Kim on her offer.

The KUWTK star wants to help people in need

Kim Kardashian wants to give back, even if it’s not her own money. The KKW Beauty founder said wants to help “spread the love” this holiday season. She’s aware of how many people are struggling right now. And she’s using her platform to help those in need.

“I know 2020 has been really hard and people are struggling, worried about how they’re going to pay rent, put food on the table, or a gift under the tree for their kids,” Kim tweeted. “I want to spread the love by sending $500 to 1000 people.”

Thousands of fans took to Kim’s post to show their appreciation. They were excited about the opportunity of winning. Most of them explained why they could use the funds. Here are just some of the heartbreaking comments:

While $500 may not be as much as the second stimulus package, unless Trump has it his way, it’s still better than nothing. And, the money could end up faster in people’s wallets as Congress continues to debate over the COVID-19 relief package well into Christmas Eve. If they do come to an agreement, Trump will still have to sign it off. At this point, most people may not receive the money until early January 2021.

So, it’s good to see some celebrities doing their part. What are your thoughts on Kim giving away money? Sound off below.