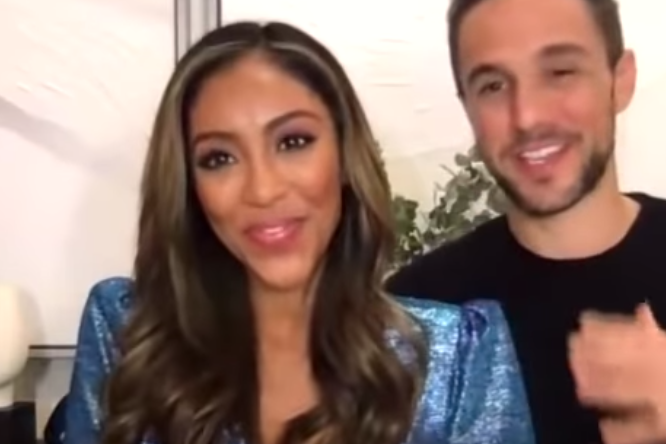 Tayshia Adams got engaged last night on The Bachelorette. Now, everyone is wondering where their relationship stands now. Apparently, they are doing great.

‘The Bachelorette’ couple is still together

Tayshia Adams and Zac Clark were on Good Morning America together this morning after getting engaged on The Bachelorette. The couple was happy to reveal the current status of their relationship. Of course, they are happily still engaged.

Apparently, the pair really enjoyed watching the season together and looking back at their love story.

“It was really beautiful to watch back. I feel like you can really see how much love we have and how authentic and genuine we were,” Tayshia says on GMA.

Zac jumped in saying, “The beautiful thing is, all the reasons I fell in love with her on the show remain true today and just like in our daily life, so it was a special night for sure last night to watch it all back.”

How sweet is that? It seems like they really make each other happy.

While still engaged, the couple says they are just focusing on their relationship – not so much the engagement. After all, they didn’t get to date very long in the first place. However, once it’s time to get married, Zac reveals he wants a big ceremony. That will definitely be one for the books! Hopefully, they will give Bachelor Nation a glimpse into the festivities.

What else happened in the episode?

Other than just a crazy engagement, there were a few other things that happened that made the night pretty dramatic.

First, Tayshia decided to let Ben stay on the show and go to the rose ceremony. She made it clear she really had feelings for Ben so this doesn’t come as a huge surprise. However, after talking with her family, she realizes that Ben isn’t the one for her. Unfortunately, she sent him home for the second time, leaving only Zac left on the show.

She also sent Ivan home at the start of the show. This was due to the fact that he is not religious and Tayshia is. Honestly, if this is a big deal to her then it definitely makes sense that she wouldn’t see a future with him.

Are you excited to hear that Tayshia and Zac are still together post Bachelorette? Let us know what you think in the comments. Come back to TV Shows Ace for more news on your favorite reality TV stars and Bachelor Nation members.

Grayson Chrisley Hits HUGE Milestone, Family Gets Emotional
Jim Bob Duggar Predicts Insane Number Of Grandchildren He Could Have
Scott Disick Is No Longer Keeping Up With Any Of The Kardashians
Brian Austin Green Agreed To Appear On ‘DWTS’ Under Certain Terms
Three Brave Busby Quints Shut Eyes & Slide Together: See Sweet Photo