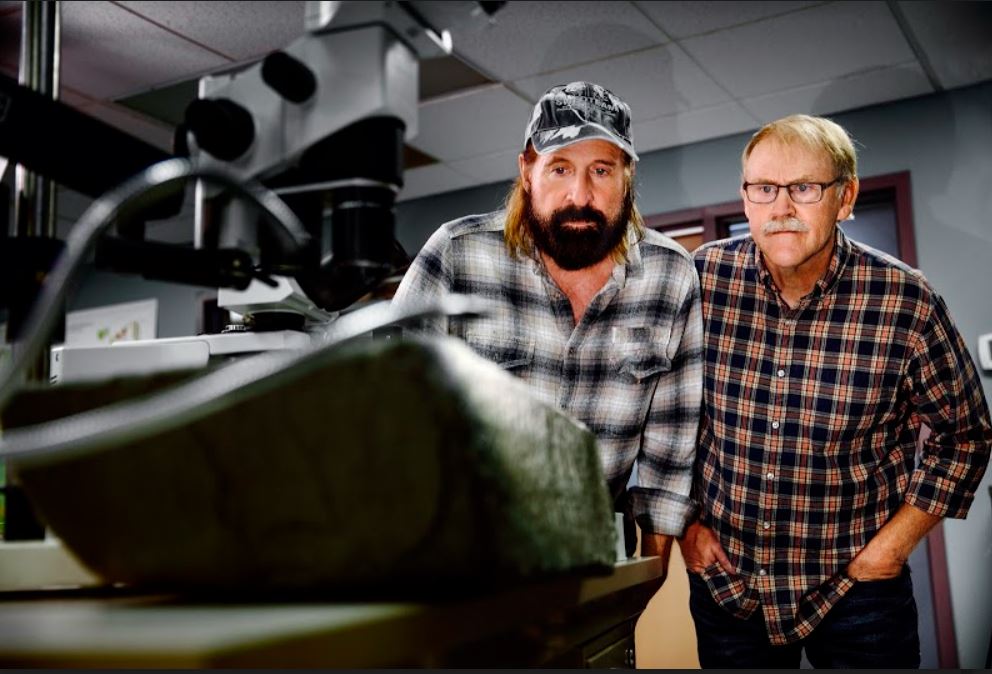 A famous Viking Stone may have new clues to American history. Are you addicted to Curse of Oak Island? Can’t get enough of anything on Discovery starring Joshua Gates? Actor Peter Stormare (Fargo) is tapping into his Nordic heritage and starring in a new Science Channel series that will explore the mystery of the Secrets Of The Viking Stone coming January 3.

The Viking Stone, or as it is known as The Kensington Runestone, has the potential to rewrite history according to the network.

TV Shows Ace was sent the press on this from Science Channel today, as the series comes the first week of January.

It features Stormare and researcher Elroy Balgaard  who will work together to unlock the clues and decipher the meaning of the stone and how it may affect history as we know it in North America and beyond.

About Secrets of the Viking Stone

The series posits that new facts and reveals of this famous runestone may well change the course of history as we know it. This series will blend truth with fantasy, science with theory, as it will put scholars and skeptics together in the same room to determine whether the Kensington Runestone holds the key to rewriting history as we know it.

Were Norsemen the first Europeans to explore the Minnesota-Great Lakes and surrounding area more than a century before Christopher Columbus? Some scholars and fervent theorists believe so and are ready to fortify their beliefs with proof.

The Science Channel series will feature actor Peter Stormare and history enthusiast Elroy Balgaard who together set out to solve the mystery of the famed Kensington Runestone – an artifact that, if proven authentic, might well revise the history of North America.

According to the network:

Throughout their deeply personal, often humorous journey across the country to uncover the truth about the founding of America through meetings with scholars, skeptics and sensationalists alike, Stormare and Balgaard dive deep into the story of the Kensington Runestone and its controversial history. Discovered in 1898 by a Swedish-born resident Olof Ohman in Kensington, Minnesota, the Runestone, a large stone slab, was found under the roots of a tree with an inscription in an alphabet unknown to scholars at the time. Its discovery was published in a Swedish-language newspaper in Minneapolis, which quickly launched one of the greatest mysteries in American history.

Of course with this come the naysayers who are questioning its authenticity.

They are citing the alleged fabricated inscription and timeline discrepancies as those who believe in the rune point to the historical evidence such as possible 14th-century Scandinavian expeditions to North America.

Whichever side of the rune you fall upon, the Kensington Runestone has divided many and is a source of heated debate among historians, experts, linguists, conspiracy theorists and scholars since its discovery.

Meeting with passionate enthusiasts around the country, Stormare and Balgaard will meet with descendants of Ohman to learn more about the family’s storied history and the stone’s discovery, as they consult with leading archaeologists to survey new sites and unearth new evidence.

In the process they will glean new ground breaking insights from top forensic geologists who have dedicated their careers to studying the stone.

For Viking Brothers Entertainment, Glenn Lund and Peter Stormare are the directors and Nina Lund and Mando Stathi are the producers.