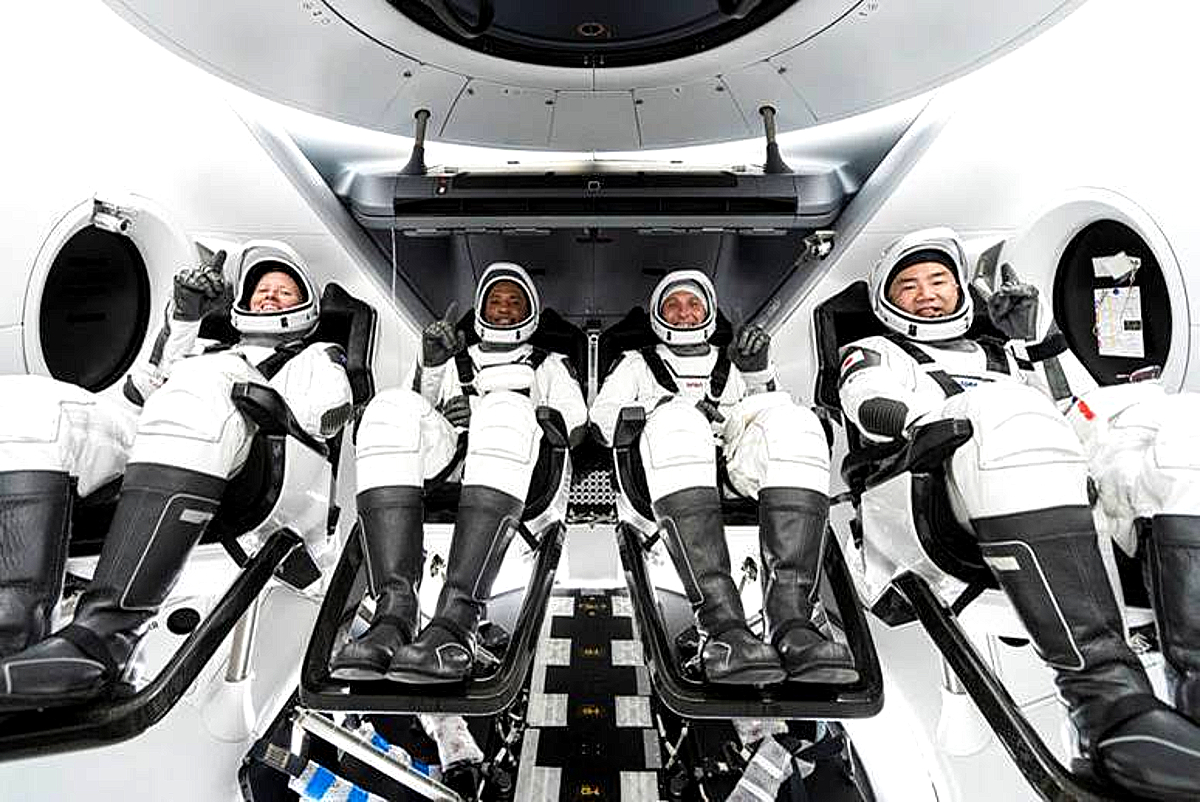 Had enough of what Planet Earth is offering of late? Ever dream of traveling to space? This Saturday, Discovery and Science Channel are going live with unprecedented access to capture the NASA and SpaceX launch of the Falcon 9 rocket and Dragon spacecraft. This mission is paving the way to commercial space travel.

NASA astronauts Shannon Walker, Victor Glover, and Mike Hopkins, and astronaut Soichi Noguchi of the Japan Aerospace Exploration Agency – who constitute the crew of NASA’s Crew-1 mission – are shown in the photo above taken inside SpaceX’s Crew Dragon spacecraft. The astronauts will arrive at the ISS to join NASA astronaut Kate Rubins, as well as Expedition 64 commander Sergey Ryzhikov and flight engineer Sergey Kud-Sverchkov, both of the Russian space agency Roscosmos.

The most dangerous part of the mission is this Saturday, and you have a front row seat thanks to Discovery and Science Channel.

What happens Saturday with the SpaceX mission?

Back in May, Discovery and Science Channel, in partnership with The Washington Post, documented the first launch of NASA astronauts from the United States since the end of the shuttle program in 2011.

This successful test mission was a partnership between NASA and SpaceX, and the first U.S. crewed mission to orbit on a privately built spacecraft. Astronauts Bob Behnken and Doug Hurley traveled to the ISS in the SpaceX Crew Dragon spacecraft, propelled by the SpaceX Falcon 9 rocket.

Now, Discovery and Science Channel will bring viewers inside one of the key moments in space exploration.  Both networks will go live with unfettered access to capture the NASA and SpaceX launch of the Falcon 9 rocket and Dragon spacecraft, which will carry the Crew-1 astronauts to the International Space Station (ISS).

Groundbreaking in that this will be the first official mission launching astronauts to the ISS on board SpaceX’s reusable spacecraft and rocket. This is a first step to paving the way to commercial space travel.

The lift off is also a multiplatform event, and will simulcast live on both coasts on Saturday, November 14, at 6 PM ET/ 3 PM PT on Discovery and Science Channel.

“We are thrilled to once again have such incredible access that can only be found on Discovery and Science Channel,” said Scott Lewers, Executive Vice President of Multiplatform Programming, Factual & Head of Content, Science in a press release to TV Shows Ace.  “For this moment of international unity and hope, we will bring our viewers together to witness a spectacular celebration of space exploration.”

“At The Washington Post, we are committed to providing authoritative and compelling coverage of the universe and our place in it,” said David Cho, Business Editor at The Washington Post in the same release. “Together with Discovery, we look forward to bringing viewers closer to this momentous launch. Christian’s deep knowledge of the space industry will help viewers better understand the event and what it means for the future of space travel.”

This latest multiplatform event marks the third live broadcast of historic space events for Discovery and Science Channel in partnership with The Washington Post and staff writer Christian Davenport, whose depth of experience allowed him to gain inside access to key players. Davenport is one of the country’s leading chroniclers of the space industry. His background and experience will add keen insight to the day’s event, as a co-host of the live broadcast. Davenport joined The Post in 2000 and was on a team that won a Peabody Award in 2010 for its work on veterans with traumatic brain injuries and has been on reporting teams that were finalists for the Pulitzer Prize three times. He is the author of two books, “The Space Barons: Jeff Bezos, Elon Musk and the Quest to Colonize the Cosmos” (2018) and “As You Were: To War and Back with the Black Hawk Battalion of the Virginia National Guard” (2009). He has also served as a Public Policy Scholar at the Woodrow Wilson International Center for Scholars and a fellow at the Alicia Patterson Foundation.

Follow Discovery on Facebook, Instagram, TikTok and Twitter and use the hashtag #SpaceLaunchLive. In addition to watching the return on Discovery and Science Channel, viewers can stream it live by downloading the Discovery GO app. Fans can also create photos and videos of themselves in space wearing life-like SpaceX helmets using Discovery’s Space Filter on Facebook or Instagram.

‘Seeking Sister Wife’ SPOILER: Is Kaleh Still With The Clark Family?
‘Sister Wives’ Star Christine Brown Goes On Weekend Getaway Without Kody
‘Chrisley Knows Best’ Fans Wonder About Todd & His Cryptic Posts
‘Bering Sea Gold’ Is Back For Season 13: Airtimes, Who Is Back On Discovery Show?
Is Tom Bergeron The New ‘Bachelor’ Host?! Inside The WILD Rumor