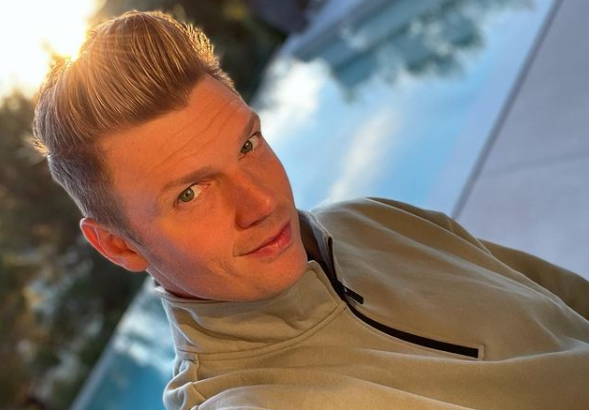 The Masked Singer ended its season 4 run on Wednesday, December 16th, unveiling the final three contestants. (If you haven’t heard who they were by now you are very talented at avoiding spoilers, but here is your warning: SPOILER ALERT!) Taking third place was the flashy, florescent, pink crocodile who was unmasked to the surprise of some as Nick Carter! The experienced pop star chose the color for the Crocodile because “Pink is a happy color and it reflects on how I feel on the inside. I’m happy and sensitive and loving and caring.”

Carter has wanted to compete on the show for a couple of seasons and in fact, almost competed in season 3 as the Turtle! Carter revealed, “I developed the costume on the phone, with drawings and everything, for the Turtle”. Unfortunately, Nick was on tour with Backstreet at the time of season 3 and was not able to compete. So, Jesse McCartney took on the character of the Turtle and put in an impressive second-place finish.

Carter started his career at eleven and has been working in the industry for twenty-nine years! His career shot to superstardom when he became the youngest member of the iconic boyband The Backstreet Boys. Carter has also released three solo albums outside of the band. When asked if being a member of the Backstreet Boys had typecast his career Carter said he loved being in the group. “I don’t think I was pigeonholed. When it comes to being in the group, I love being on a team, being a member of something. We share with each other and love each other.”

However, as much as he loves his band and being an entertainer; Carter has felt a little stunted as an individual artist. “I don’t think I have grown and discovered who I was as a person. I’ve done a couple solo albums here and there, they haven’t been all that successful”. Carter went on to say, “I’m always going to be a Backstreet Boy and I’m always going to be doing music with the guys.” The pandemic has allowed Carter time to not only participate in The Masked Singer but to create his own music as well. He has recently released a new single “80’s Movie”. Carter said, “Right now I have time to explore as an individual and really do music as a solo artist.” For Nick, it is all about balancing his time between the band and his solo music.

So, with all the success Nick Carter has; why do a show where no one knows who he is? Really the answer is in the anonymity. Artists are constantly saying how they love that the show is all about the music and talent rather than the face. People come to expect certain things from performers, which can be frustrating and I expect demoralizing at times for artists. Carter emphasized this point commenting, “What’s liberating about being in the mask is that you don’t have to pay attention to the noise. You can come back to it was what it was all about in the beginning when we started.”

Having a new lease on performing by simply singing the songs you love must be so refreshing for entertainers. They get to surprise long-time fans by performing songs by other artists, and they demonstrate their talent to people who have never really listened to their music before. The concept of The Masked Singer is to challenge what you know and to surprise people with a talent they would never expect. Nick said, “Being in the Croc outfit, I was able to experiment with different sounds and see what people’s reactions were.” He also said that this experience helped him feel more confident as a solo artist. “I was able to really grow and learn and believe in myself as an individual and as a solo artist.”