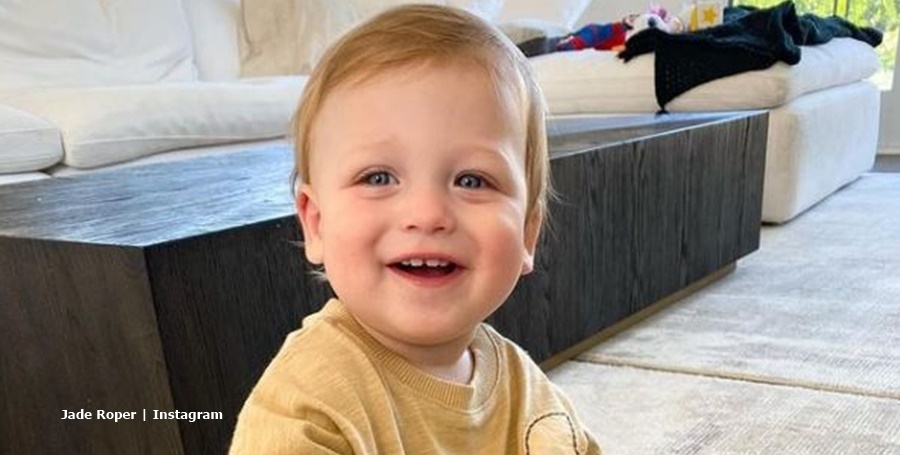 Jade Roper now raises three kids. But her middle child Brooks still features on her Instagram. Sometimes parents find it hard to balance photos of their kids especially with a new baby in their lives. Of course, fans welcome photos of Reed and Emmy, and they adore Brooks. Now, she posted a kissable photo of her son, and Bachelor in Paradise fans just love it.

Jade Roper shared such a cute photo of Brooks

We reported in September, that Jade shared some sweet video footage of big sister Emmy being loved by Brooks. It looked like the cute son of Tanner and Jade Tolbert couldn’t get enough hugs from her. And, sweet Emmy gave him all the love he asked for. Bachelor in Paradise fans saw that some months before Reed arrived. Naturally, people wonder how he takes to his new sibling.

Well, hopefully, he doesn’t feel blue about it. BiP alum Jade shared a photo of him looking so cute. Her caption read, “Ya’ll, it’s so hard to say no to those baby blues! I mean could you!? 😍😍😍” And it’s true that not many people could possibly say no to him with those big eyes and his sweet face.

The kissable photo gets toddler’s love

In the comments section of Jade’s post, one ABC fan wrote, “My 18 month old just tried to kiss my phone when I scrolled to this pic. She definitely can’t say no to his baby blues 😊.” Well, Jade loved that comment and she replied, “hahahahaha so cute!!” Really, a photo that gets the attention of a toddler who tries kissing it shows just how cute Brooks is, fans think.

Jade Roper and Tanner Tolbert produced stunning looking kids, fans agree. One of them wrote, “Brooks!!!!!!!!!😍😍😍😍😍😍😍😍😍😍 my heart is melting💘💘💘.” And another one noted, “You guys have the most beautiful babies he’s an angel 😇.” Then, this comment came in: “He is such a handsome little guy. His eyes are amazing. He looks so sweet. His laugh is so awesome.”

Emmy, fair and pretty with beautiful eyes also carries that Tolbert penchant for natural beauty. And, her little brother Reed, already looks set to bring more handsome features to the growing family. Reed arrived with a thatch of very dark hair. And that set him apart from his brother and sister. But he also came with those signature blue eyes. Some BiP fans hope he keeps that dark hair and blue eyes. But, he might turn fair like Brooks and Emmy in time.

In her post, when a fan asked Jade Roper about the color of Reed’s eyes, she noted that they are still blue, “but they look like they could turn a different color!”

Whatever color his eyes and hair end up, Reed, like Brooks no doubt produces some very kissable photos in years to come.