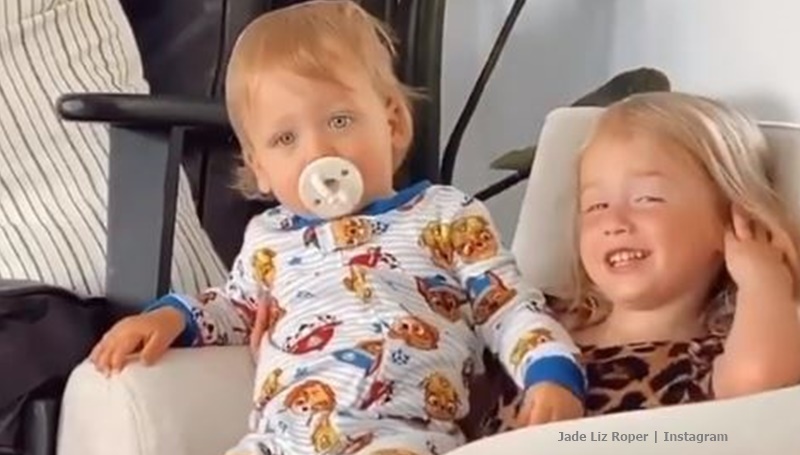 Jade Roper took to her Instagram on Thursday and shared a video of her son Brooks with big sister Emmy. It looks like the fellow can’t get enough hugs from her. And, sweet Emmy doesn’t mind giving him all the love he needs. In fact, she sweetly took his hand and pulled him back up for more hugs.

We reported in May this year that baby Brooks reached the age where he seemed very accident-prone. In fact, Jade shared on her Instagram that he could use some bubble wrap to soften all the bumps and bangs. Well, now it looks like he’s over that stage. But, if he ever needs some comfort, big sister Emmy’s there for him. Initially, she seemed a bit offish with her newborn baby brother. But, she grew very attached to him as time passed. Judging by the latest video, she seemingly adores her baby brother.

The Bachelor in Paradise alum revealed the video clip and told fans to watch for a special part of it. She wrote, “if you notice at the end, she takes his hand and says, “Come, here” for more hugs. It’s so presh. ❤️” Jade also noted that “they obviously don’t get along all the time.” However, the ABC star cherishes the good times. She also noted that he simply loves hanging with Emmy.

In the clip, Emmy sat on a chair and Brooks climbed up into her lap. Then, he slid down, before turning around for more. Up he went again, and again, and yet again. Each time, he just lapped up the hugs from Emmy. Emmy seemed very sweet with her little brother. In fact, she took his hand and pulled him back for even more. Tanner Tolbert and Jade Roper really have two gorgeous kids, Bachelor in Paradise fans think.

One fan commented, “So sweet!! Emmy is such a good big sister 😃.” Then, another fan noted, “So so sweet!! Love sibling love 😘.” One fan loved the video so much they said that their “heart melted.” They “watched it over and over” for the good feelies. So many fans agreed that the video clip made them smile a lot. And, soon fans hope for even more cuteness as Jade expects her third baby.

They obviously don’t get along all the time, but moments like these are ones I never want to forget. 😍😍😍 They are so sweet with each other, he loves to be wherever his sissy is. And if you notice at the end, she takes his hand and says, “Come, here.”, for more hugs. It’s so presh. ❤️

Bachelor in Paradise fans heard that Jade and Tanner expect their third baby. You may recall that Brooks came along so fast they never made it to the hospital in time for his birth. Jade ended up giving birth in her closet. US Weekly reported that Jade worries her next baby might arrive even faster. But, as she needs a COVID-19 test before admission, she joked that she should just go and birth the next one “in a field.”

What did you think of the cute video that Jade shared of Brooks and his sister Emmy loving each other? Sound off your thoughts in the comments below.