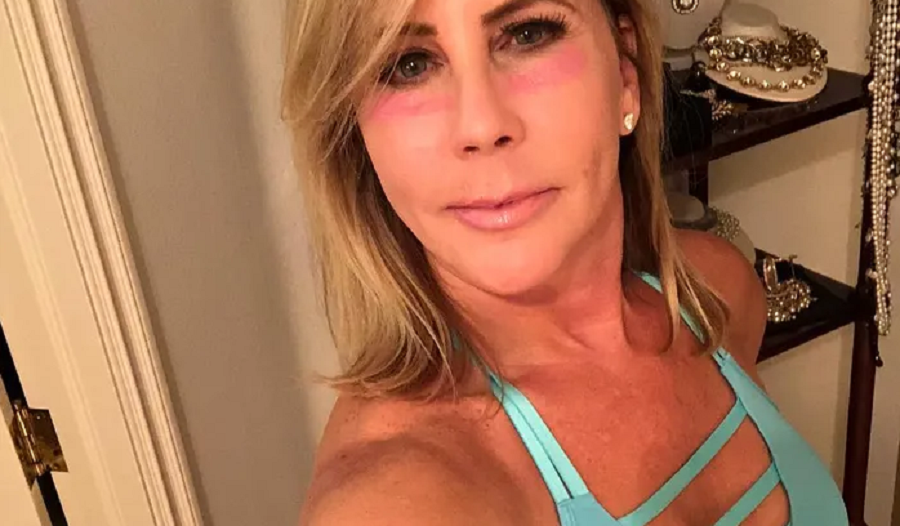 Vicki Gunvalson showed off her incredible body on Instagram. The Real Housewives of Orange County alum credited vitamin gummies for making her look that way. On Saturday, December 12, Vicki posted two photos of herself in just a brown sports bra and olive green sweat pants. There’s no doubt that the 58 year old looks good.

But fans are doubtful as to how she got her hot bod. The former Bravo star credits taking her vitamins everyday. While it’s such a simple task, it’s the only thing she’s doing to get her shredded body. Some think it has to do with her cosmetic surgery procedures.

In the lengthy post, Vicki credited them for giving her a flat tummy during the holiday season. The television personality said they taste “yummier” than the “yucky ACV shots I used to take.” However, fans aren’t convinced that it’s just the vitamins that gave Vicki a flat stomach.

“Is it really the gummies?” one fan asked.

She got trolled on Instagram after some accused her of going under the knife.

“Seriously. After god knows how many surgeries. You can honestly post this??!!” a second follower wrote.

“Oh the beauty of Instagram and tummy tucks!!” a third said.

“They might be good for maintaining her tummy tuck. Do we get the tummy tuck before or after taking them?” an Instagram user joked.

According to the Flat Tummy Lifestyle online store, the Apple Cider Vinegar Gummies were created to slim the tummy. It also reduces appetite, boosts energy, and supports weight management. Of course, people use a variety of methods to help maintain their fitness. Also, Vicki was never shy about talking about her plastic surgery procedures.

Is not being on Housewives helping Vicki Gunvalson?

Regardless, fans think Vicki Gunvalson looks great these days. Some of them feel that she looks even better since leaving The Real Housewives of Orange County. The 15th season of the show just premiered a few months ago without Vicki or Tamra Judge for the very first time. However, their names still pop up every so often.

“Wow ❤️never looked better maybe not being on housewives is doing the trick,” one fan wrote.

Earlier this year, Vicki left the show that made her a household name. She was demoted to a friend role, which she turned down. The “Whoop It Up” podcast host just bought a new luxury vacation home in Mexico and a new mansion in North Carolina. So, her income hasn’t been hurt by this change in her life.

Vicki purchased the home to be closer to her daughter, Briana, who lives in the area. She previously shared the beautiful shots of the property on Instagram. Vicki is living life and looking great doing it.