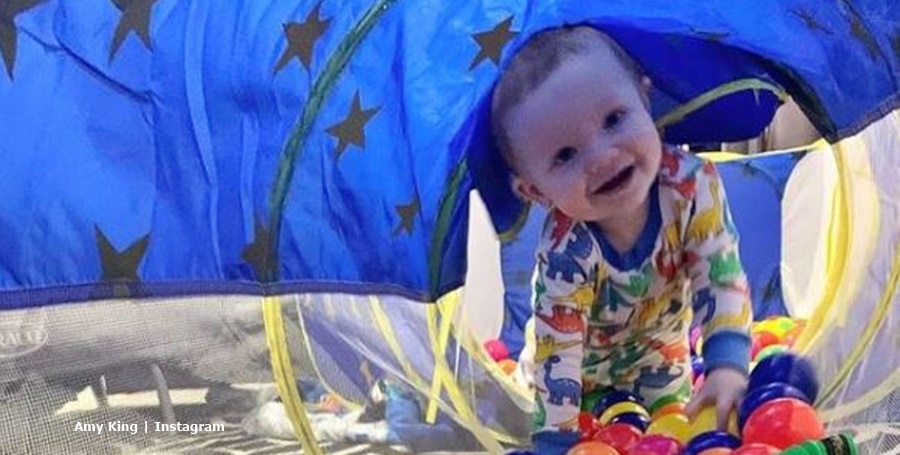 Amy King and her husband Dillon look forward to Christmas this year. Actually, their cute son Daxton probably reaches an age where he enjoys the celebration. So, he’s involved in the decorations this year. Last year, a photo that Amy shared, hands-down won the internet for cuteness. Now, fans adore his Christmas tree decorations.

In October, we reported that Amy celebrated Daxton’s first birthday rather low-key. But months count for years with little kids. Clearly, he demonstrates he develops his own opinions on things. So, when Amy started decorating his Christmas tree, he nursed definite ideas on the decorations. Eventually, Amy gave in and did things his way. Taking to Instagram on Friday, December 11, she shared about the cute outcome.

Sharing a photo of Daxton in his crib and his tree nearby, the 19 Kids & Counting alum talked about the tree. Her caption read, “I started to decorate [Daxton’s] little tree yesterday.” However, he kept on “handing” his mom his “stuffed animals” Plus, he put them up on the branches. At first, Amy King thought it a bad idea. But then, she wondered, “Why not!?!”

Amy realized that after all, it is Daxton’s tree. And, he loves animals. Amy noted, “it’s the easiest tree I’ve ever decorated!!” Plus, the toys come with some nostalgic attachment as his “great grandma” gave them to him. Some of the toys on the tree are “TY beanie babies!!” She donated some to a “children’s shelter” but kept some back for Daxton.

Well, many 19 Kids & Counting fans decided Daxton hit on something special for his own tree. And reactions came thick and fast on Amy King’s post. One TLC fan commented, “That’s so adorable!! I 💙 Dayton’s tree 😁.” Another person noted, “Beautiful tree and he looks so happy beside it 💕🙏.” Actually, the cute little red-headed boy wears a huge smile all over his little face.

Is it okay for kids to help decorate the tree?

Austinmoms.com reports that in their first year, kids more than likely just want to “stare” at the lights or try and “eat the decorations.” But after that age, they want to participate. So, they suggest that parents allow them choices for their “own little tree.” While some trees might look like a “hot mess,” kids feel so “proud” when they participate. And, as they really “want to help,” why not let them do that?

Amy King allowed Daxton his input into his little tree. Far from a hot mess, her fans actually agree that it looks very special. And, Amy managed her own touches as well. Sometimes, little kids also enjoy hanging their playschool decorations on the tree. No doubt, as Daxton grows older, he starts making some of those as well.