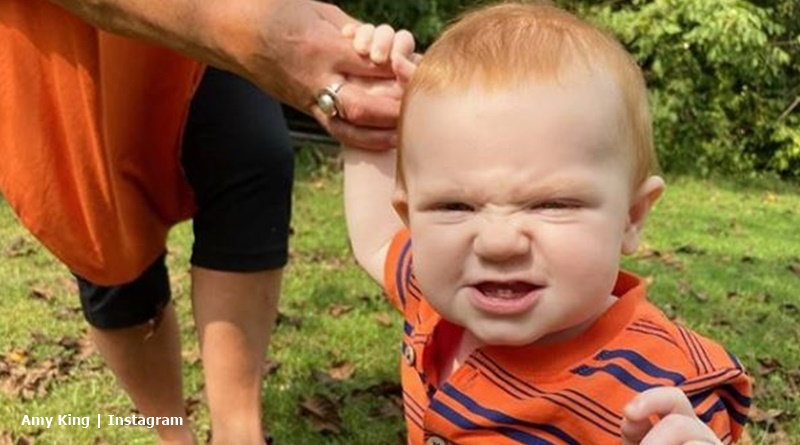 Amy King gave birth to Daxton on October 9, 2019. Now a one-year-old, the little red-headed boy is cute as a button and full of happy smiles. Not to mention the birthday cake, that he smeared on his mom’s face during the photo shoot. On October 15, Amy took to her Instagram and talked about celebrations for her son’s birthday.

Daxton grows into an adorable-looking little boy. We reported that back in July, still very much a baby, he slept his way through fireworks. But, as parents know, three months makes a huge difference in the way kids develop. So, these days, Daxton’s alert, and interested in pretty much everything. On his first birthday, Amy shared that Daxton did the cake smashing thing. And, he reached out and smeared frosting on his mom’s face and in her hair.

Amy King put up 102 balloons in the house for the occasion. And, in another post, she revealed a plate of cookies customized for her son. But, they didn’t throw a huge party for him. The Duggar cousin posted up another photo on Thursday, October 15, and talked about how they kept the birthday celebration small. Amy King shared a photo of her smiling boy that clearly revealed his bright copper-colored hair.

In her caption, Amy said, ” Dad does not understand. Lol🤪😂” It came after she talked about how she “didn’t go overboard for his 1st birthday party.” She added, “Daxton, you won’t remember your 1st birthday but one day you’ll see all of these beautiful/ funny memories! Your 1st year has been so fun! Lets go for 2! (sic).” And,  a lot of fans agreed that at the age of one, a big party seems a bit over the top.

One Amy King follower pointed out that when she has more kids, she might go for bigger first birthday parties. That’s because the older siblings “love a party.” But, with just one child in the home, others agree Amy’s probably right. After all, the little one won’t understand what’s going on, And, the chances they even remember it at all are very small.  A fan commented, “Love this! Congrats mama! 1st year really is a milestone for mommy and daddy! The parties do get better and better .”

I feel like I didn't go overboard for his 1st birthday party… but I've heard they just get bigger and bigger each year! Dad does not understand. Lol🤪😂 Daxton, you won't remember your 1st birthday but one day you'll see all of these beautiful/ funny memories! Your 1st year has been so fun! Lets go for 2!🥳 Ps: my hair still smells like cake! Ok night friends!✨

Apart from fans debating on Amy’s page about celebrating the first birthday, the debate seems rather common. HuffPost reported that Cathy Ranson, editor of ChannelMum.com, sums it up well: “Celebrating a child’s birthday is never pointless.” However, she cautioned against exceeding the budget. and, pointed out people should do it any way that makes them “feel happy.”

Like Amy King, the memories and the photos of Daxton’s first birthday party become precious in years to come. And,  it celebrates “getting through the first tough year of parenting.” So, ” whether you…celebrate with family and friends or other babies is entirely your choice.”

What do you think about Amy King keeping Daxton’s first birthday low-key? Where do you stand on the first birthday party debate? Sound off in the comments below.