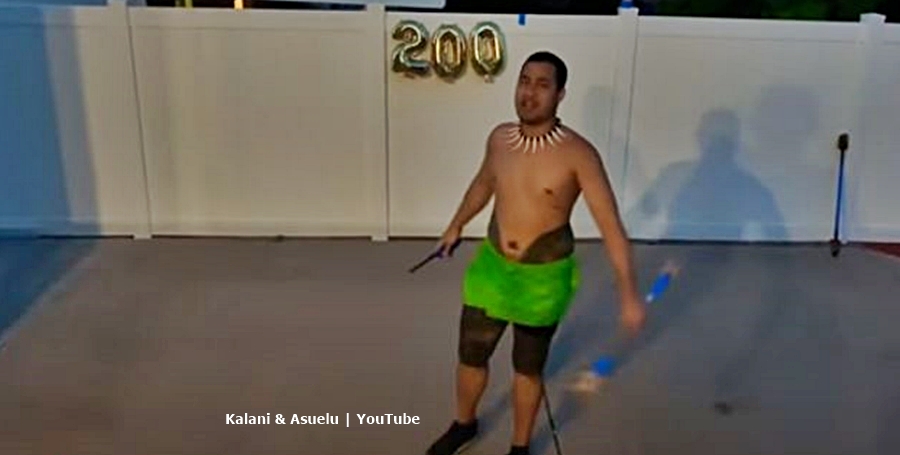 90 Day Fiance Asuelu Pulaa seems like a playful character. Sometimes, too playful and non-serious for TLC fans. Some accuse him of immaturity. And they frown on him as he raises two little boys with Kalani Faagata. But over the weekend, he really acted up and it got fans in stitches of laughter.

We reported that Asuelu dances and instructs for a living. He actually dances in a Polynesian style and works for Siva Pasefika, a Polynesian Entertainment company. But obviously, without a proper 9 to 5 job, he earns very little. Nevertheless, fans enjoy his antics. And, he shared about his fire-dancing on their YouTube. One fan said in the comments, “How can anyone not like this guy, puts a smile on my face.”

However, others think that 90 Day Fiance Asuelu enjoys playing around as he’s like a child himself. In fact, Distractify even noted that some fans think he’s “on the Autism spectrum.” Mind you, his sister shut that down very quickly. She said, “I’ve spent plenty of time with Asuelu to know that he’s not autistic. He’s not slow…If he [needed evaluation], my family would know.”

Fans in stitches over TikTok video

These days, Asuelu takes his entertaining tactics over on TikTok. On the weekend, he shared one of his clips from TikTok on his Instagram. In it, he dressed like a female Polynesian and danced around seductively. Then, he captioned it with, “Mine is bigger than you @kalanifaagata 😂🎄🎅🏽 #justbenatural.”

Fans loved the clip as he looked so feminine and the 90 Day Fiance star took a dig at his wife Kalani. Plenty of fans posted up rolling with laughter emojis. Plus, they commented the post seems “too funny!”After all, everyone who follows the show knows that Kalani boasts a decent-sized cleavage.

Most castmembers of TCL complain about the editing. And often, they portray stars as villains. For instance, when we wrote about him dancing for Siva Pasefika, TLC made out as if he only just got the job. But, when we checked it out, it turned out he already worked there for two years. Perhaps the show also edits Asuelu in a bad light. Or, at least worse than he might act in real life.

Fans of 90 Day Fiance know Kalani Faagata as a strong personality. And, she’s not likely to tolerate a fool for very long. Plus, her dad came from Samoa, and so she fully understands that the people from there generally take life less seriously than Americans.

What did you think of the amusing clip that 90 Day Fiance star Asuelu Pulaa shared on his Instagram? Sound off in the comments below.