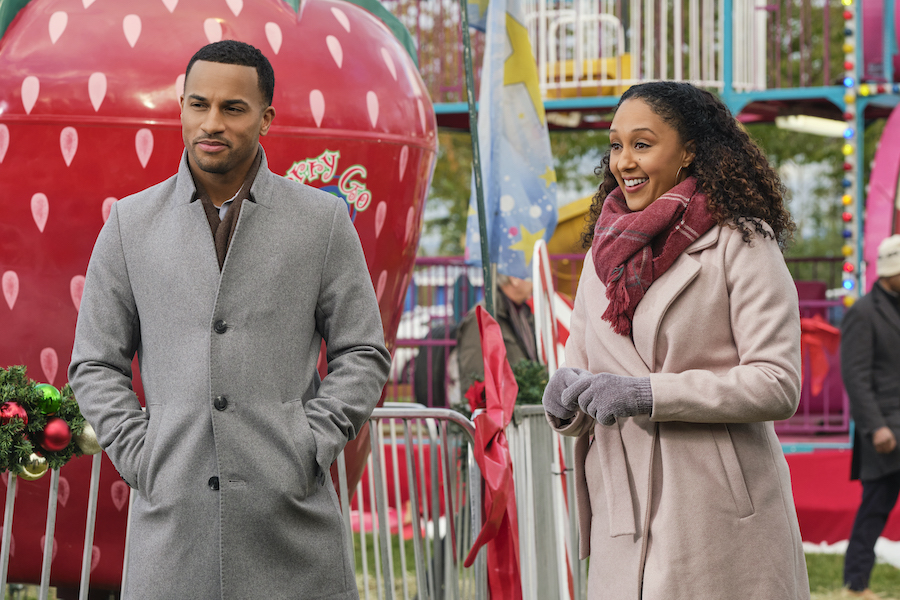 Hallmark’s latest Countdown to Christmas movie, Christmas Comes Twice, asks us, what would you change if you could do it all over again? Starring Tamera Mowry-Housley (A Christmas Miracle), Michael Xavier (Christmas On Wheels) and Sheryl Lee Ralph (Ray Donovan), this story takes us on a magical carousel ride.

What Is Hallmark’s Christmas Comes Twice About?

What if you were given a second chance? According to the Hallmark press release, astrophysicist Cheryl Jenkins (Mowry-Housley) works for the National Science Foundation. There, she reviews grant applications, but in all truth, she would rather be doing her own project.

It is time for the holidays and Cheryl heads home for some family time. As is their tradition, the first thing she does is visit the annual Christmas carnival with her sister, Trish (Zarrin Darnell-Martin, Burden of Truth).

While at the carnival, Cheryl sees the carousel and takes a ride. When the ride is over, she heads over to find her sister. But, something has changed. It is five years earlier! She cannot wrap that around her astrophysicist brain.

Yet, Cheryl sees this as her real opportunity. She decides she can reset her life and make some different choices. This also includes some important connections, including meeting up with her beloved science teacher, Ms. Nelson (Ralph). Sadly, this mentor had passed on five years ago, and this is a precious chance to see her again.

In addition, Cheryl meets with her “frenemy,” George (Xavier). But, time has made her look at George in a totally different way. Moreover, they have quite a connection.

But, the carousel returns her back to the present. Did Cheryl learn her lesson? Most of all, is the love she found in the past right there in the present?

Tamera Mowry-Housley fans will get to see a lot more of the Christmas Comes Twice star. According to Deadline, the Sister Sister star will be a regular contributor to Home & Family. She will also star and executive produce more movies in the near future.

Mowry-Housley is thrilled. “There’s just something about a Hallmark movie that warms your heart and I’m beyond excited to be joining the network not just as an actor and executive producer, but moreso as a family member.” And, referring to Christmas Comes Twice, Mowry-Housley added, “I can’t wait to share our first original film this holiday season.”

Michelle Vicary, the Executive Vice President of Programming at Hallmark’s parent company, Crown Media Family Networks is also quite “thrilled” to welcome Tamera. “Having worked with Tamera on a few original movies previously it is a joy to have her star and executive produce more projects with us. The really exciting part of this deal is that she will join our talented cast of Home & Family, one of the best lifestyle shows in television.”

When Can You Watch Christmas Comes Twice?

On premiere night, make sure you head over to Twitter. Hallmark and the stars of Christmas Comes Twice will be live tweeting. This is like watching with your friends! Be sure to follow the hashtags and ask questions, or learn some really fun BTS facts.

Be sure to catch the premiere of Christmas Comes Twice, on Sunday, December 13, at 8 p.m. Eastern.