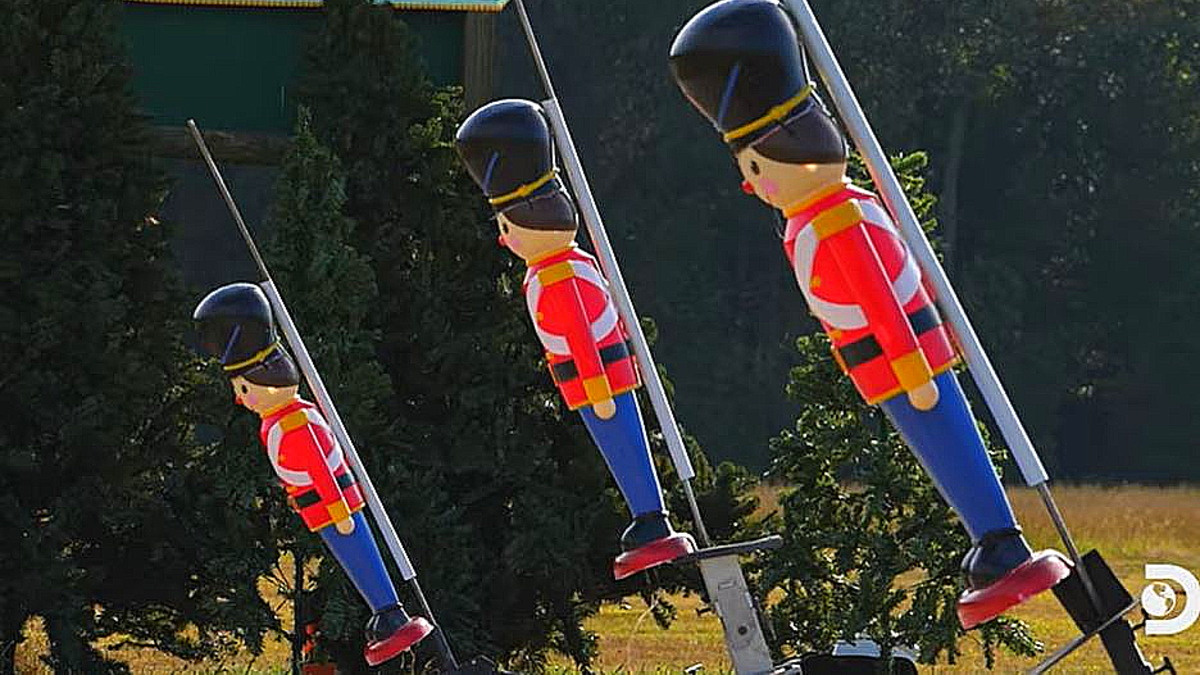 On tonight’s Rocket Around the X-mas Tree we get a pop of firepower from the teams as they square off in this holiday competition from Discovery.

TV Shows Ace exclusive preview is titled Flight of the Toy Soldiers and is a scene from tonight’s premiere. Three teams of “merry masterminds” are competing to see who can pack their pines with the most firepower, save Christmas Town from an Abominable Snowman and also send toy soldiers to the gifting front lines.

And missing their mark will get their names put right on the naughty list.

What happens in the episode?

The exclusive preview below shows how an outdoor challenge is queued up for the competitors as science buff Nick Uhas presides over all these competitions including other tests like building the best Christmas tree rocket, launching letters to Santa and sending candy canes up into the sky.

Nick introduces the challenge and says: “This contest is called flight of the toy soldiers. You have four soldiers and trying to get them as close as you can
to the Christmas presents.  We are going to launch our four toy soldiers individually, that way we can launch the first one see how it goes and then adjust for the last three to make sure they really hit that target.”

The Odd Rocketeers are the longtime friends, Max Kauker and Alex Moreno, who met through their university’s rocketry club and discovered friendship at first flight.

The Snow It Alls team includes Alex and Lydia Yeckley, a fun father-daughter duo of mechanical engineers who are ready to put their shared history of high-pressure robotics competitions to the test.

Rocket With The Fletchers features the married couple team of Myron and Tiera Fletcher.  They are ready to put their advanced degrees in fields like structural and thrust engineering to use and their motto, ‘Faith, Love and Rockets,’ into action.

The challenges are wacky and fun, from launching Christmas trees right up into the sky, to an unusual attempt to deliver letters to Santa Claus, or even tonight’s challenge of blasting toy soldiers directly at Santa’s big pile of presents.

Discovery notes that the series is the “non-stop high-flying yuletide rocket action we all need to close out the year. Holiday cheer is in the air… and soon faux Christmas trees and holiday décor will be too! But don’t worry, no real trees were harmed in the making of this tree-mendous showdown.”

For Discovery, Wyatt Channel is executive producer and Andrew Lessner is producer.

Rocket Around the X-mas Tree  airs Thursdays at 10 PM  on Discovery.