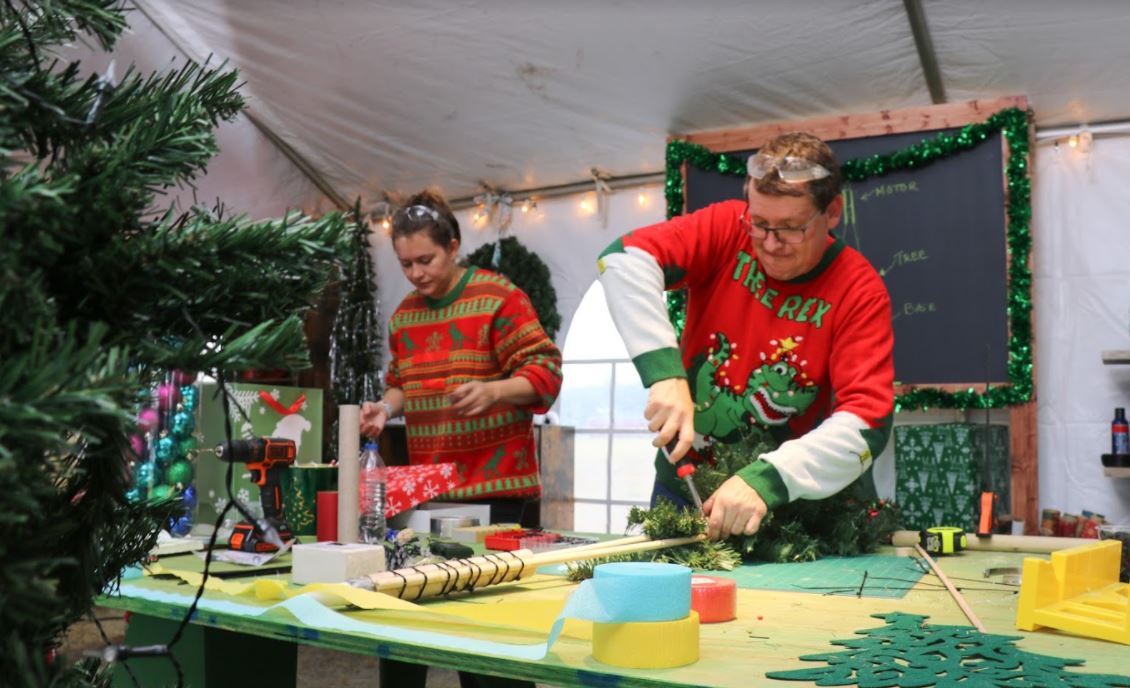 Do you miss the Punkin’ Chunkin’ of the MythBusters past? Now Christmas gets its own pyrotechnical razzmatazz from Discovery as the new series Rocket Around the Xmas will fill that holiday void in a most explosive fun fashion.

The countdown to Christmas blast-off is nigh as the network has found a fresh and competitive new premise to pit teams against each other in crazy colorful Christmas-centric rocket builds to ignite for lift-off.

TV Shows Ace has the exclusive announcement and the exclusive clip posted below, a teaser that shows all the teams in their ugly Christmas sweater glory (matching, of course) as they devise ways to use traditional holiday decor and then take it to the fireworks level for blasting off into the sky.

What is Rocket Around The Xmas Tree all about?

You, the viewer, can make it anything you like…perhaps a drinking game or a homeschooling lesson for the kids in how to build a rocket.

Commonly found things like mistletoe, nutcrackers, and Santa Claus figures are used in these creative builds.

The teams assembled are tasked to create missiles, and as Discovery says, will be “catapulting candy canes and sky-rocketing snowmen.”

In an epic and explosive holiday themed rocket competition, teams of deck-the-hall daredevils put their rocketry skills to the test each week as they compete in a series of explosive contests to determine who can take their holiday cheer to new heights and walk away with the coveted ‘Golden Rocket-Tree Topper’ trophy.

Who is featured on the new series?

Hosted by YouTube star and science aficionado, Nick Uhas, these teams run the gamut from rank amateurs to actual aerospace engineers, and they come ready to win this build competition.

All of them have unique backgrounds and skill sets so they can meet the challenge as they take on these super-charged challenges and give 2020 the explosive send-off it desperately needs to have.

The Odd Rocketeers, made up of longtime friends Max Kauker and Alex Moreno who met through their university’s rocketry club and discovered friendship at first flight.

The Snow It Alls team which is Alex and Lydia Yeckley, a cool father-daughter duo of mechanical engineers who are ready to put their shared history of high-pressure robotics competitions to the test.

Rocket With The Fletchers is the married couple and team Myron and Tiera Fletcher who are ready to put their advanced degrees in fields like structural and thrust engineering to use and their motto, ‘Faith, Love and Rockets,’ into action.

The challenges are wacky and fun, from launching Christmas trees up, up, up in the sky, to an attempt to deliver letters to Santa Claus, or even blasting toy soldiers directly at Santa’s pile of presents. Ornaments become precious fragile cargo that needs to land intact while candy canes become warp speed projectiles… and hopefully nobody shoots an eye out.

Discovery notes that the series is the “non-stop high-flying yuletide rocket action we all need to close out the year. Holiday cheer is in the air… and soon faux Christmas trees and holiday decor will be too! But don’t worry, no real trees were harmed in the making of this tree-mendous showdown.”

Rocket Around The Xmas Tree premieres Thursday, December 3 at 10pm ET/PT on Discovery. Viewers can join the conversation on social media by using the hashtag #RocketAroundTheXmasTree