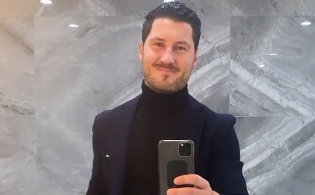 Dancing With The Stars pro Val Chmerkovskiy had a lot of people to cheer for this season. He wasn’t the only member of his family to compete. His sister-in-law Peta Murgatroyd competed with Vernon Davis, while his wife Jenna Johnson competed with Nev Schulman. Jenna and Nev were very close to taking home the Mirrorball Trophy. But even so, Val graciously congratulated Artem Chigvintsev and Kaitlyn Bristowe on their big win.

Val Chmerkovskiy Honors The Winners With Some Kind Words

The dancer posted some Instagram photos of Jenna congratulating Artem on his first time win with a touching caption.

“To my brother @theartemc !!! What a ride my friend. I’ll keep it short cause you got a baby and a fiancé to attend to but bro, as hard as it was seeing Jenna lose hers, it was equally consoling to see you win yours,” Val wrote. He went on to discuss the “cruel” twist that Season 28 had in store for Artem. Just before execs announced the Season 28 cast list, Artem received a call letting him know his time on DWTS was over. Fans and castmates alike love Artem, but the show decided to move in another direction without him.

“A year ago felt like a cruel ending to your tenure on #DWTS , a year later you are holding up the trophy. The universe does pay attention, and sometimes it makes things right. Congrats on finally validating your excellence and years of contribution to this show and to all the pros around you,” Val continued.

It’s definitely refreshing to see that the pros know how to lose gracefully. Val Chmerkovskiy’s older brother, Maks, had a bit of a reputation for being a sore loser.

Val and his own partner Monica Aldama finished in 10th place out of 15 couples. But even after their elimination, he kept a positive attitude. He told Us Weekly that he was excited to cheer for Jenna and Nev. And now that DWTS is over for the year, could a family be in order?

Jenna Johnson said in previous interviews that she and Val are starting to have baby fever. Could another Dancing With The Stars baby be in the cards?

In the past, Jenna and Peta joked they had a pregnancy pact. After Peta left Season 29, she also announced she was ready to have a baby. Keep checking the headlines — we may have some exciting news to report very soon.

Are you excited that Kaitlyn and Artem brought home the Mirrorball Trophy? Even though Jenna and Nev came in second place, they put up an amazing fight. Which performance was your favorite this season? Let us know in the comments. Keep following TV Shows Ace on social media for more stories like this one!