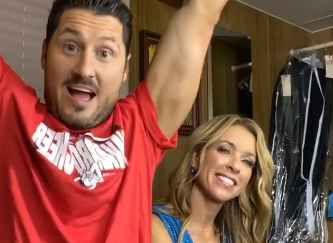 This week, Dancing With The Stars fans said goodbye to Cheer’s Monica Aldama and her pro partner, Val Chmerkovskiy. Although the pair continued to improve week after week, this wasn’t the first time they found themselves in the bottom two. At the end of the night, the judges chose to save Jeannie Mai and Brandon Armstrong instead.

Even though Monica and Val are sad to leave, they’re looking forward to a few things as well. For one thing, Val says he’s excited to live at home with his wife again.

Val Chmerkovskiy is married to his co-star, pro dancer Jenna Johnson. As long as the two competed, they had to quarantine away from one another due to the pandemic. That way, if one person tested positive for Coronavirus, only one competing team would be impacted instead of two. DWTS has plenty of married couples, and they all had to follow the same rules.

“I guess that’s the silver lining. I’m excited to see my wife,” Val told Us Weekly after the elimination. “I’m excited to continue to root her on in this competition. I think she’s definitely a front-runner and deserves to win. So, I’m glad we can all now — as a family — consolidate our votes in one direction.”

Living Apart Was Rough For Val And Jenna

Val and Jenna just bought a house when they learned they had to live apart during the competition season.

“We finally unpacked and got settled in. We were loving it, and then we got called and they were like, ‘You know, one of you is going to have to move out,’” Jenna told Us Weekly back in September. “There wasn’t much discussion about who it was going to be! I think it was kind of just assumed. He’s the sweetest. He moved into an apartment, but I am so sad. I will admit it. I’m a very needy person when it comes to Val. I love my Val snuggles. I love just, like, touching him. He always jokes because he’s like, ‘You love to be alone, but with me next to you.’ And it’s so true. So I do miss my hubby!”

Jenna and her celebrity partner Nev Schulman currently top the leader board and many think they have what it takes to win it all.

So what’s next for this power couple once the competition is over? Jenna previously stated that she has baby fever. When Season 29 is over, the two may take the time to start their own family. Fans will just have to stay tuned to find out.

What Will Happen Next on DWTS?

Val and Monica had a good run and thanked fans on Instagram following the elimination.

The pair may be out of the competition, but you can still follow them on social media to keep up with them. Keep watching Dancing With The Stars to see who takes home the Mirrorball Trophy. Do you think Val’s wife, Jenna, has a shot? Let us know in the comments.