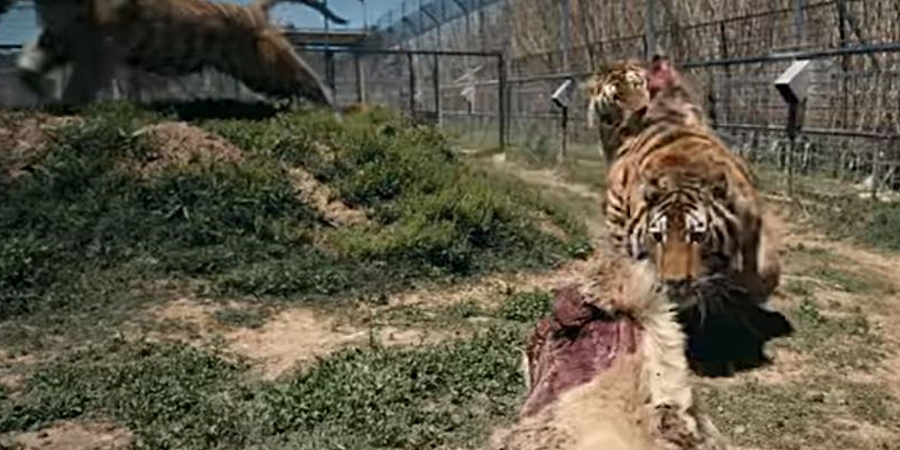 Carole Baskin recently featured on Dancing With the Stars. She didn’t stay very long, but she enjoyed her experience. Of course, she became slammed for it as many people think she murdered her husband Don Lewis. She never attended the finale, and possibly, it’s because she’s busy cleaning up Joe Exotic’s old zoo. It’s covered in graffiti and stinks to high heaven.

Carole Baskin deals with loads of graffiti and garbage

We reported that when Carole got sent home from Dancing With the Stars, she at least fulfilled her grandma’s dream. Apparently, her grandma hoped that Carole would one day become some kind of star. So, she taught her about holding a teacup with a pinky up. And, she made sure that Carole practiced walking tall. So, when she danced, Carole remembered her grandma who helped with those ambitions for her.

Carole Baskin never made it to the finale of DWTS. Recall, everyone else attended. But Carole made an excuse. ET reported that “the Tiger King star, [on Netflix] who is currently back to work with her Big Cats Rescue animal sanctuary in Florida, will not be traveling due to COVID-19 restrictions.” But, she seemingly found other things that needed dealing with. This included graffiti, garbage and rotting meat at the zoo.

Well, she never made it to the DWTS finale, but Carole apparently made it to Oklahoma. TMZ reports that she engages in a massive cleanup operation at Joe Exotic’s old zoo. Jeff claims he never left the zoo in a terrible state. And they cited him as saying, “You think of all people, she would know about being accused of something without evidence.” Well, someone made a huge mess.

Apparently, graffiti with real nasty messages about Carole Baskin adorn the place. Plus, rotting meat in a container stinks so badly, she can’t use it again. Around the property, she apparently found a lot more rotting meat. So, neighbors complained about it. Not to mention lots of garbage and trash scattered everywhere.

Recall that Jeff Lowe took over the zoo. But later, Carole won the property after a court appeal. In fact, Global News reported that he vowed to “leave Joe Exotic’s zoo ‘a complete hell’ for Carole Baskin.” Now, it sounds like that scenario totally played out.

When Carole Baskin’s husband Don Lewis disappeared, he apparently went to Costa Rica. And fans of Tiger King know he often went there often. But, a lot of people believe the theory by Don’s kids that she possibly fed him to the tigers.

Of course, if it turns out one day that Carole never killed Don Lewis, it might bring home to people the massive amount of hate that she received unfairly. Hopefully, time will tell.