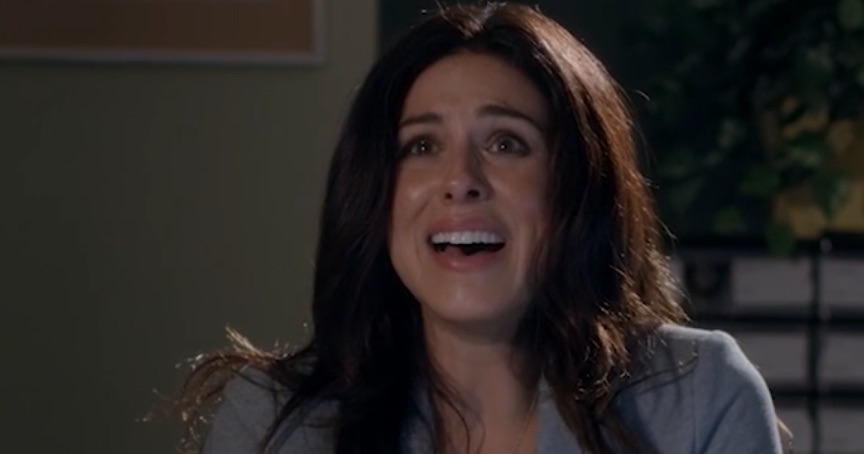 Who Stars In Lifetime’s Finding My Daughter?

There are a few familiar names in Finding My Daughter. This Lifetime movie stars Cristina Rosato (No Good Deed), Jesse Hutch (Project Blue Book), Megan Best (I Am Somebody’s Child: The Regina Louise Story) Al Sapienza (Capone) and Kyle Cassie (Deadpool), this is that sort of crazy thriller you expect from LMN!

What Is Lifetime’s Finding My Daughter About?

According to the LMN synopsis, Ashley was only 16 when she gave up her newborn daughter for adoption. The years went on, and her life changed, but Ashley always wanted to know what happened to her baby girl.

But, 18 years later, Ashley got a letter. It is from Brittany (Best). Brittany wants to meet her birth mother. Ashely is beyond thrilled. She immediately heads back to her hometown. She is finally going to see her daughter!

Not so fast! Brittany has disappeared and Ashely isn’t getting much help in looking for her. But, local bookstore owner Scott is willing to help her out. In addition, Jake, the town sheriff, who happens to be Ashley’s high school boyfriend is there to help her find Brittany.

Although it has been nearly two decades, Jake and Ashley still have the spark. But, Jake finds out a well-kept secret that can derail any sort of reunion. In the midst of that chaos, Ashley trusts the wrong person. That mistake could cost her Jake’s love and reunion with her daughter.

In December, Lifetime’s Hateful & Grateful morphs into Slay Belles. These are cautionary and devious tales set in wintery landscapes. This is not the time of festive lights and going merrily ever after!
Kicking off the merriest time of the year is Secrets In The Snow. Starring Aubrey Reynolds (Surrounded), Travis Caldwell (Good Deed) and Liz Fenning (The Ghostmaker). Christina (Reynolds) and her new boyfriend, Ted (Caldwell), are headed to a dreamy, wintery spot in the country.
There, Christina meets an unexpected, and unwelcome guest. Soon, she is caught up with some major drama in Ted’s family, that is about the accidental death of Ted’s older brother, Paul. Suddenly, Christina is in danger when she discovers that perhaps Paul’s death was not accidental after all. Could that killer be inside the house?

Catch the premiere of LMN’s Secrets In The Snow on Saturday, December 5 at 8 p.m. Eastern.

Emma (Vega) is the grateful recipient of a heart transplant. Turns out, the donor was her estranged cousin–who could have been murdered!
Catch the premiere of Pretty Little Dead Girl on Saturday, December 12, at 8 p.m. Eastern.
The last Slay Belles movie is Stolen In Plain Sight, starring Gracie Gillam (Z Nation), Ann Mahoney (Bad Moms), Kyle Clements (Doom Patrol) and Gary Grubbs (The X Files). In order to escape her abusive husband, Melissa heads over to a small town in Louisiana. There, her folks have a cabin where she and her baby, Ryan, can find refuge. This is the place where Melissa and her sister used to spend as children.
But, Ryan is abducted, and the local authorities are not helping out. Turns out, the town has some dastardly secrets, so Melissa has to do what she can to get her baby back.
Stolen In Plain Sight premieres on Saturday, December 19 at 8 p.m. Eastern, on LMN:

Sometimes you just want a little Christmas magic and fun. Switch over to the regular Lifetime Channel for Christmas trees, music and a lot of romance.

Don’t forget to catch the premiere of Finding My Daughter, on Saturday, November 28, at 8 p.m. Eastern, on Lifetime Movie Network.