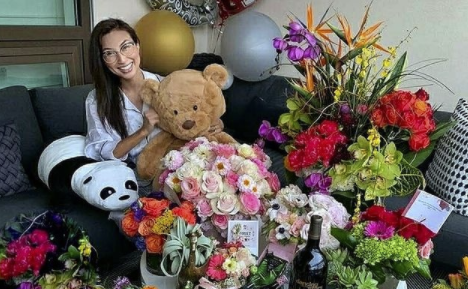 Dancing With The Stars fans were very excited to see some of their favorite Season 29 contestants return during the finale last night. Even Jeannie Mai made an appearance. After a successful throat surgery, she felt well enough to rejoin her partner Brandon Armstrong and watch from the balcony.

Jeannie Mai Keeps Everyone Updated On Her Condition

Yesterday, the Holey Moley star published a thoughtful Instagram post. In the photo, The Real host is surrounded by flowers, stuffed animals, and other gifts people sent to her while she was in the hospital.

“Friendship is a wildly underrated medication. Those who come into your life and make you see sun where you saw clouds🤍 The past few weeks felt loonng and heavy as I couldn’t speak or leave bed. But the calls, text messages, funny videos, matzo ball soupssss, bone broths😋 & encouraging words from all my friends in work and LIFE brought me back to 💯 ‼” Jeannie began.

She went on to thank everyone for thinking of her and being so helpful during her recovery.

The End To An Incredible Season

Even though Jeannie Mai and Brandon Armstrong cut their time short this season, they had an incredible journey. It wasn’t any secret that they were one of the judges’ favorite couples. They finished in 9th place out of 15 couples.

This marks Artem’s first win as a pro dancer and the second season in a row that a former Bachelorette won. Hannah Brown was the Season 28 champion.

So What’s Next For The Competitors?

But now that the competition is over, everyone is moving on. Jeannie Mai has a wedding to plan! There’s still a lot she has to decide, but she already knows she probably won’t wear a white dress.

In previous interviews, she said she would like to have a winter wedding. The colder season has a special significance to her and her fiance, Jeezy.

“Jay and I met on November 28, and it’s a very special time for us,” she said in an interview with PEOPLE. “So I’m thinking winter because everything can be really cozy, you can have hot chocolate, spiked hot chocolate, slippers, fuzzy slippers for the dancing afterward. There’s so many things you can do in a winter wedding.”

But for the time being, Jeannie looks forward to getting back on The Real. She returns to the set this week. And she’s back on YouTube now too.

What did you think about Jeannie Mai’s Dancing With The Stars run? Did you wish she won first place? Let us know in the comments.

Keep following TV Shows Ace to catch all the latest celebrity and entertainment news. We’re here to keep you filled in.