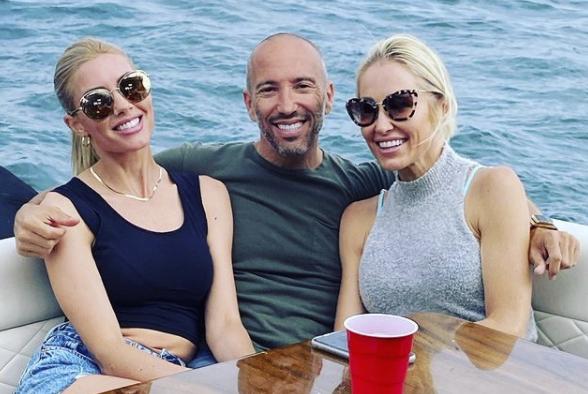 Chrishell Stause isn’t the only Selling Sunset star plagued by gossip. Sources believe her co-star, Jason Oppenheim, might be dating a Dancing With The Stars pro. He and Season 27 champion Sharna Burgess were spotted out together a few times.

However, Oppenheim denied the romantic rumors.

“She’s just super cool,” he told Us Weekly regarding Sharna. “We just went to lunch a couple of times.” He went on to say that he thinks she’s “awesome,” but there isn’t anything going on between the two of them. Sharna Burgess competed on the current season with Desperate Housewives star, Jesse Metcalfe.

.@jessemetcalfe and his pro dancing partner @SharnaBurgess said goodbye after competing during the show’s ‘80s night, and talk about their journey on @DancingABC.#DWTShttps://t.co/hGqPGG30qb pic.twitter.com/PbbsEdxfYN

“I’m not huge on dating,” Oppenheim continued. “Obviously COVID just doesn’t make it that easy anyway. But you know, I’ve got my little kiddos and I’ve got my Netflix account and I got a one room house and I just feel like it’s hard to beat that.”

However, the real estate mogul isn’t totally opposed to dating. He told Us Weekly that he’s open to the idea, but it will really take someone special to grab his attention. Oppenheim admitted he’d rather go out with friends than spend a romantic night with someone.

But when he finds that special someone, he knows his Selling Sunset co-stars will have to approve first.

“I felt like [Chrishell Stause] and Mary [Fitzgerald] and Amanza [Smith] totally have to approve of the girls I date,” he added.

The Real Estate Giant Comments On The Chrishell Stause Rumors

Oppenheim has also said that he would want to approve of anyone Chrishell Stause dates in the future. Right now, she’s at the center of a pretty massive rumor. Right from the start of her run on Dancing With The Stars, viewers noticed that she and her partner, Gleb Savchenko, looked pretty steamy on stage. Only days after their elimination, he publicly announced he and his wife broke up. Almost immediately, fans began pointing fingers at Chrishell.

“It just seems like she can’t catch a break, to be honest,” Jason Oppenheim said to Us Weekly. “That was difficult to deal with, but I think she’s getting used to it almost. … I mean, she made a statement. She made it, she clarified and she moved on, and I think most people would probably get all worked up and defensive and angry and she just kinda was like, ‘Can’t control that.’ She’s good at it. She’s good at managing that stuff. And I guess she’s more in the spotlight now, so she’s just taken it well.”

What About The Future Of Selling Sunset?

If you haven’t finished Selling Sunset yet, all three seasons are up on Netflix. Us Weekly asked Jason Oppenheim if he believed there would be a Season 4.

“Oh, I have no doubts about [it]. There’s a lot of stuff going on for all us,” he said. Netflix has yet to make any official announcements, but hopefully one will come soon. But in the meantime, you can always rewatch the first three seasons and relive all the drama.

If you enjoyed this story, follow us on social media for more stories. We’re always here to tell you all the latest celebrity and entertainment news. Stay tuned for more!