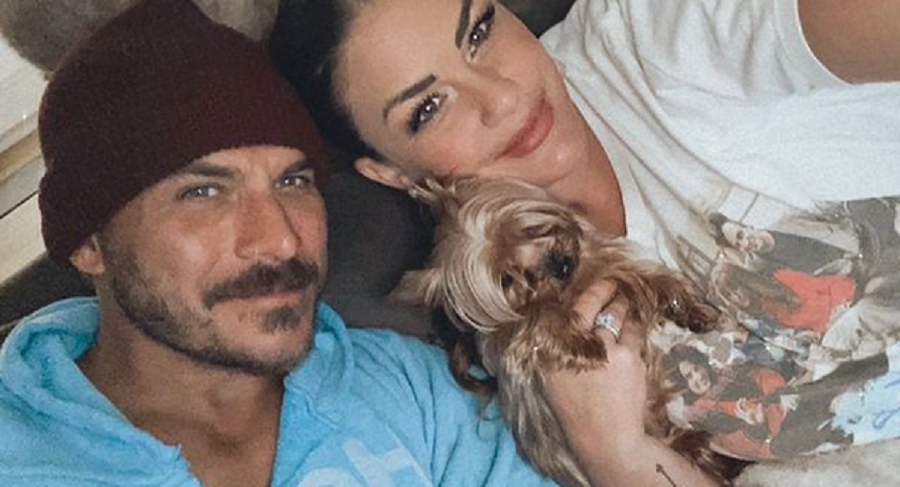 Jax Taylor dished on Brittany Cartwright’s pregnancy. The Vanderpump Rules star made an appearance on Katie Maloney’s “You’re Gonna Love Me” Dear Media podcast. He did not hold back when he talked about her pregnancy. Jax revealed what it took for him and Brittany to conceive their first child.

He also shared that Brittany was sick every day of her pregnancy. As TV Shows Ace previously reported, Brittany has been open and honest about her morning sickness. But it doesn’t just happen in the morning. It occurs around the clock. Brittany has tried many remedies to help ease her sickness.

Jax Taylor reveals how he and Brittany conceived their first child

It’s not as romantic as it sounds. Jax Taylor shared the moment when he and his wife Brittany Cartwright conceived their first child. Apparently, it didn’t take much. Jax revealed that it happened on their “second try.”

“We were in Kentucky when we conceived. This was our second try,” Jax Taylor told his Vanderpump Rules co-star Katie Maloney on the Friday, November 20 episode of her “You’re Gonna Love Me” Dear Media podcast. “People [are] saying we were trying a long time, [but] no.”

The Bravo star said that they downloaded a fertility app just a month before Brittany got pregnant.

“As you know as a woman, there’s only one day you can truly get pregnant,” Jax explained. “And I don’t know how my drunk-a** friends in the past have done it, but you know, I hope they all played the lottery because there’s literally one day. There’s a pink, a red and a pink.”

However, their first attempt at conceiving is not as sexy or romantic as it sounds. Neither of them was even in the mood. It was a very strategic process. Jax detailed the very moment when he and Brittany conceived.

“I think I was probably cutting the grass and she was like, ‘Come upstairs, it’s time.’ And let me tell you how romantic that is,'” Jax joked. “You know it’s two o’clock in the afternoon, you’re cutting grass. I mean, the last thing I want to do is have sex. And she’s like, ‘Don’t worry, you can just get in and get out, it’s fine.’ I was like, ‘I’m sold, I’m fine.'”

When they first got the baby news

However, their first try wasn’t successful. They ended up conceiving in Brittany’s home state of Kentucky rather than Los Angeles. Jax revealed they got it in before they went to the airport. The moment they found out they were expecting their first child took place early in the morning.

“So I get woken up by my dogs at six in the morning [and] I gotta take my dogs out for a walk,” the television personality recalled. “Because I’m a light sleeper, I roll over [when she gets up] and she comes out screaming holding a pregnancy test. ‘Oh my God! Oh my God!'”

Jax Taylor joked that he was “half-asleep” when Brittany shared the news. He joked that he “almost had a heart attack.” Brittany took several pregnancy tests that same morning to make sure she was pregnant. After four tests later, the couple realized they’re about to be first-time parents.

Unfortunately, Brittany got very sick soon thereafter. Jax Taylor was very worried about his wife during the early months of her pregnancy. He told Katie that she is “having a little rougher pregnancy” than even some of her co-stars. Stassi Schroeder, Lala Kent, and Scheana Shay are also pregnant with their first child.

“I mean, every woman is different, but she’s literally thrown up every single day,” Jax continued. “And she’s constantly throwing up, but you know, the doctors think that’s normal. It’s a healthy baby.”

Katie noted that Brittany started to feel better by week 16 of her pregnancy.

“She was sick every day, horribly,” she said. “And then like right when the 16th week started, it’s like overnight, just everything changed.”

However, Brittany is staying positive. She’s even kept a sunny and optimistic outlook on social media. Jax admits he’s had a lot of empathy for his wife.

“I have like, I have serious sympathy pains for her,” he added.

Brittany’s baby is due sometime in April 2021. The couple previously shared they are having a boy.