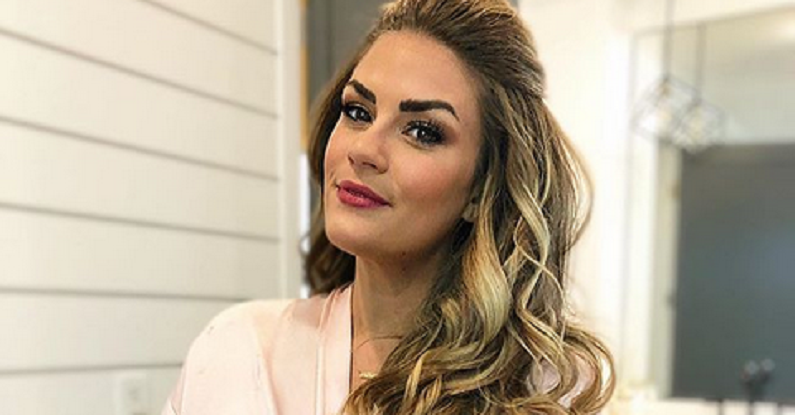 Brittany Cartwright is opening up about morning sickness. This comes after the Vanderpump Rules star came after body shamers. Over the weekend, she fired back at trolls after they questioned the size of her baby bump. And now she’s revealing more about her struggles with morning sickness.

The 31-year-old is expecting her first child with husband Jax Taylor. She’s one part of the Pump Rules baby boom. On Monday, November 2, Brittany had plenty more to say about morning sickness. But she’s smiling through it all.

Read on to learn about her struggles and how she copes.

Brittany Cartwright posted a beautiful photo of herself on Instagram. In the smiling photo, she wore a green-and-white gingham off-shoulder dress. She held her baby bump as she smiled brightly at the camera. She also rocked a low ponytail and white tennis sneakers.

In the caption, Brittany revealed that she’s had morning sickness during the first weeks of her pregnancy. She is currently 17 weeks pregnant as of Tuesday, November 3.

“Through this first and second trimester I have been super sick so I’ve spent most of my days in bed (or close to the bathroom) and it’s been exhausting,” Brittany wrote. “Let me tell y’all, morning sickness does NOT just happen in the morning! While trying to find every remedy in the book I’ve been googling and googling, and a friend told me to try the @peanut app.”

The Bravo star raved about the app. She uses it to communicate with other moms-to-be who also struggle with morning sickness. Brittany says she asks a lot of questions and gets the answers she needs. In addition, she took to her Instagram Stories to talk about her morning sickness.

In a series of clips, Brittany said that gummy candies like Sour Patch Kids help curb her nausea. She’s also been eating ginger candies. Brittany admits that she’s been trying everything. She loves the help that she’s received through the mobile app.

What else helps Brittany Cartwright with her morning sickness?

The Kentucky native has opened up about her morning sickness before. In a previous Instagram Story, Brittany Cartwright shared some of her “morning sickness cures.” This proves that she’s willing to try anything. Some of her favorites include a jar of dill pickles and a funny television show. In the clip, she curled up in her living room as she watched episodes of The Office.

Brittany has spoken to People about her nausea before. She admitted that she gets “loads of morning sickness” and feels “pretty tired,” but it’s all worth it. The television personality has already fallen in love with her baby boy. Just experiencing his heartbeat is enough to put her back in a positive frame of mind.

Josie & Kelton Balka Bond With Daughter Willow While Baby Is In NICU
Elizabeth Hurley STUNS Instagram With Sizzling Topless Photo
Courtney Waldrop Calls Life With Eric Incredible – Celebrates HUGE Day
Does ‘Seinfeld’ Have A Netflix Release Date Yet? When To Expect It
‘Renovation Island’ Resort: Why Was It Shut Down?