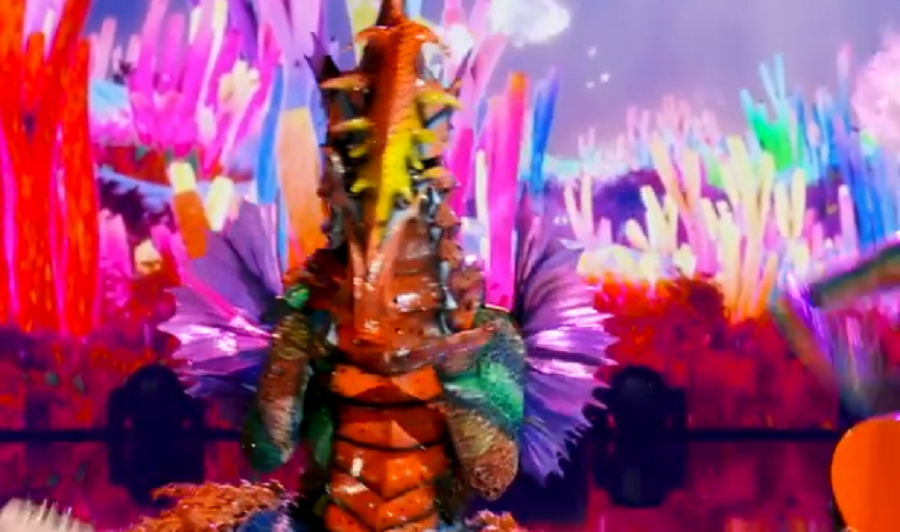 The Masked Singer had a double whammy on Wednesday night. Two contestants had to go home. But there’s one contestant that has people talking. This contestant could very well make it to the end.

The Seahorse is as strong of a contender as the Sun and Popcorn. During its latest performance, the Seahorse sang Britney Spears’ debut single “….Baby One More Time.” It even mimicked the iconic pop star’s voice. The Seahorse started its eye-opening performance by mimicking Spears’s signature baby voice and sounding like the star.

Then, they took the song and ran with it. The Seahorse put its own spin on the track and showed off their vocals.

The Masked Singer – Who is the Seahorse?

Ever since their debut performance, the Seahorse made it clear that they are a professional singer with plenty of experience. As TV Shows Ace previously reported, it appears to be a woman who sings for a living. After the Seahorse performed Rihanna’s “Only Girl (In The World),” the Masked Singer panel believed that she was an established pop star in the industry.

The first guesses included Bebe Rexha, Hailee Steinfeld, and Halsey. However, during their first clue package, Seahorse wore a cowboy hat and boots. They sipped on tea while sitting near the campfire with a dove, a frog, and two dogs. The hog displayed warts, which was a playful take on Harry Potter’s Hogwarts.

On Wednesday night, Seahorse held an acoustic guitar in their clue package. Then, a spiritual minister spoke about the Seahorse. Throughout the clue package, a pair of baby dolls, Nashville chicken, and pickles were seen. The Astronaut costume, who was Hunter Hayes last season, told the panelists that the Seahorse was never in a girl group.

What do the fans think?

Of course, the panelists have gotten it all wrong. Or, at least that’s what the viewers think. When the Seahorse performed on The Masked Singer on Wednesday night, they could tell that it was two-time Grammy Award winner Tori Kelly. Here are just some of the comments that lit up Twitter:

As fans know, the 27-year-old singer has performed with Kermit, which connects to the frog from the first clue package. She’s also a huge fan of Harry Potter, which explains the hog with warts. Kelly released a gospel album and a Christmas-themed record titled A Tori Kelly Christmas. Her clue package on Wednesday night had Christmas themes.

Luckily, Seahorse made it through the competition. That means viewers will have to wait a bit longer to see if Kelly is underneath the mask. What are your thoughts? Do you think Tori Kelly is the Seahorse? Sound off below in the comments section.

The Masked Singer returns for a special episode on Thursday night, November 26 at 8 p.m. on FOX.