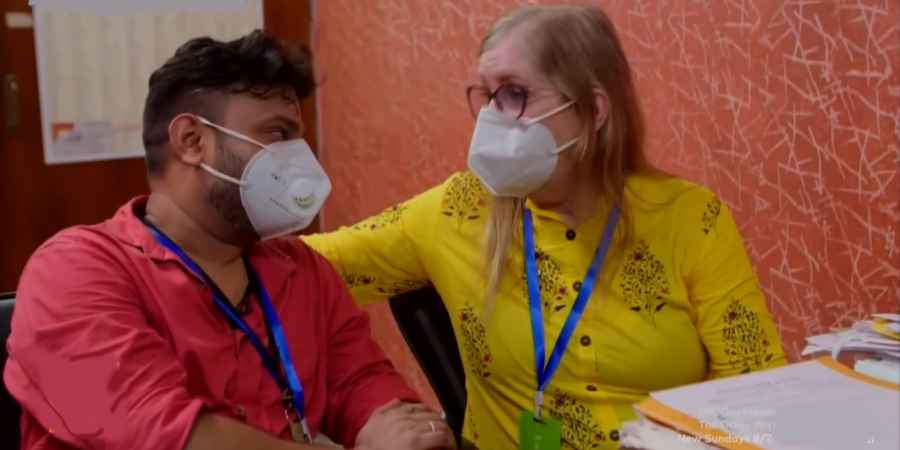 Sunday’s episode of 90 Day Fiance: The Other Way saw Jenny and Sumit getting good news about their marriage. However, at the same time, Sumit gives Jenny bad news, relating to his parents. They will never accept a marriage between the pair, as Jenny is 61, and Sumit is only 32. While Jenny was ready to push ahead with their intention to marry, Sumit tells her he needs to speak to a lawyer.

Sumit recently became legally divorced from his first wife. As her visa is set to expire, Jenny is pushing him to get married. Once the visa expires, she won’t be able to legally stay in India unless they marry. However, Sumit’s parents have been a problem all along. They have already told their son they will never accept his marriage to Jenny. This is due to their significant age difference, with Jenny being 61 and Sumit only 32.

Sunday’s episode of 90 Day Fiance: The Other Way saw Jenny and Sumit ready to legally declare their intention to marry. However, they believed they would need his parents’ permission to do so. In the meanwhile, they find out they don’t actually need their permission – they could go ahead and get married with no problems. Despite this, should they do so, Sumit could lose his parents for life.

His family's support would mean the world to him. #90DayFiance pic.twitter.com/RVXNnoQAx2

Sumit wants to see a lawyer

While Jenny wants to push ahead with their declaration of intent to marry, Sumit is hesitant. The 90 Day Fiance star tells Jenny that they need to speak to a lawyer first to find out more about the rules.

Jenny, looking frustrated, said, “OK, so do you want to declare our intention to marry today or not?”  She said he wants to ask the lawyer first. Jenny asks what he is going to ask the “damn lawyer.” She stresses that her visa is going to run out and she can’t keep flying out of the country. Jenny tells Sumit his reaction isn’t what she expected.

In a confessional, Sumit tells the cameras he feels pressured to marry Jenny. However, he does admit that she can’t avoid the fact her visa is going to expire. Singh says a lot of things are coming at the same time and it isn’t easy for him to handle this.

The couple did go to visit a marriage lawyer, who said they could marry without any issues. Sumit and Jenny were told they wouldn’t legally need Sumit’s parent’s approval. This was because his parents had previously said they objected to the marriage. Despite this, Sumit said he wants to talk to his parents before getting married. He doesn’t want to take the chance that he would lose them. Despite this, Jenny objects.

Jenny tells the cameras that Sumit’s parents will never give their blessings for their union. She says it isn’t going to happen and she doesn’t understand why Sumit is trying to stall the marriage. However, the TLC reality star did agree to a ring ceremony with Jenny. This would signify their engagement. Sumit says they will invite just a few friends.

Jenny said the plan doesn’t include inviting Sumit’s parents to the ring ceremony. She said Sumit is okay with the ring ceremony because it isn’t a big deal like the marriage. Jenny said she came to India this time because Sumit had promised they would marry. She hopes he isn’t stalling the issue, as this is her future. Jenny added that her life is at stake and Sumit had better not let her down.

Sumit’s brother and his wife visit

Later in the show, Sumit’s brother Amit visited them with his wife, Sharee. Amit was shocked to hear they were having a ring ceremony. He said Sumit is not mentally prepared, adding that he needs to tell their parents.

Sumit asked Amit to help in convincing his parents to accept their marriage, but Amit said they would never accept this, due to the age difference. He told Sumit that he needed to get ready to face the consequences, as he could lose his relationship with their parents.

By this point, Jenny has had enough and she breaks down in tears. She sobs, saying she is sorry she is that age, but Sumit loves her. Jenny says they love each other and she is sorry people can’t accept that fact. She said she is happy as long as she is with Sumit and this is her life now. Jenny asks why people can’t accept this – she can’t help how old she is. Moreover, she doesn’t want to have to leave him again.

Jenny says she wishes Sumit’s parents would stop being so set in their ways, asking people to just accept them. She says again that they love each other and Sumit is happy.

As noted by ET, a preview into next Sunday’s episode reveals Jenny and Sumit meeting with his parents. When he tells them they are getting married, his mother says, “Over our dead bodies.”

Watch the continuing drama on 90 Day Fiance: The Other Way on Sundays at 8 pm ET.