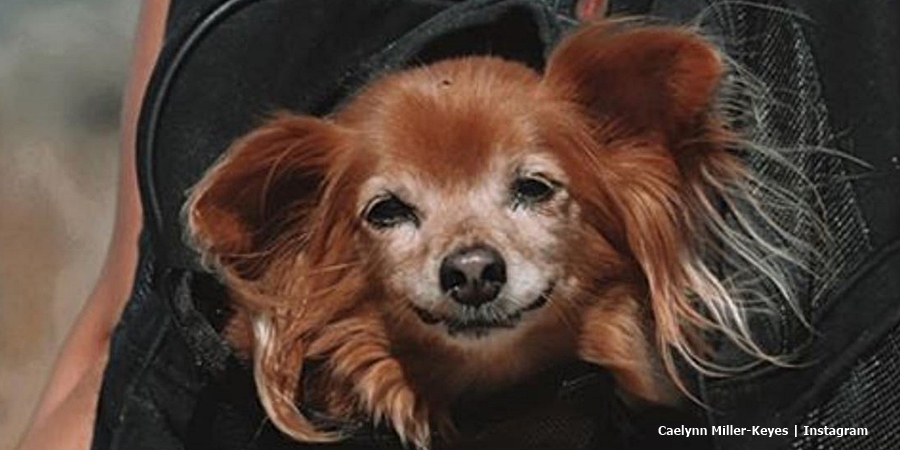 BiP star Dean Unglert scared people last week when he went on another adrenalin-filled adventure. But over the weekend, he and Caelynn Miller-Keyes did something less terrifying. They went cycling and little rescue dog Pappy went along as well. He looked super-adorable sitting in his harness, strapped to his mom.

BiP – Pappy on an outing with Caelynn Miller-Keyes and Dean

Bachelor in Paradise star Dean Unglert jumped out of a helicopter this weekend. But at least that seemed less terrifying than his stunt earlier in the week. We reported that he swung out on a rope from a hot air balloon. And, for a moment, fans thought he slipped and fell. But, he carried a parachute in his pack, and it was just a stunt while skydiving. Still, many people wouldn’t give him a thank you for that so early in the morning.

This weekend started off as a bit of a disappointment for the BiP couple. On his Instagram stories, Dean shared a photo of a broken cable and lock. He captioned it with, “Another day, another stolen bike….people can really suck sometimes!” Anyway, he and Caelynn managed to still get out and enjoy themselves. Looking like she carried a tennis racquet in her backpack, she set off on her electric bike. Cycling alongside, Dean took some video clips.

Strapped to his mom in a harness so he could see where they went, Pappy looked very adorable. Dean captioned the video clip with, “those two make the charge bike look extra good.” Pappy got his nose sticking out ahead, and his little ears sticking up. Probably, he enjoys speeding along on a bike as he probably can’t run that fast anymore. The adopted doggie suffers from some ill health and Dean previously told his followers he’s old. So, they just hope he has the best life in his golden years.

Actually, it seems a pity that Dean never shared it on his main Instagram page. Fans simply adore the little pup after all. No doubt, he’d have gotten loads of comments from ABC followers. In fact, their popularity rocketed when they first took Pappy in as a foster dog. Later they adopted him. Now, they got his teeth fixed and he gets out and about with the BiP couple quite a lot.

Bachelornation.com reported that Pappy would bring an “Instagram feed” improvement for many fans. And, they weren’t wrong. With his Yoda-like ears, whenever they share photos of him, more than 50k likes usually roll in from happy BiP fans. Pappy’s such a good news story, that Dean and Caelynn often draw a lot of praise during a difficult year.

What did you think of Pappy on his cycling outing with Caelynn? Sound off in the comments below.