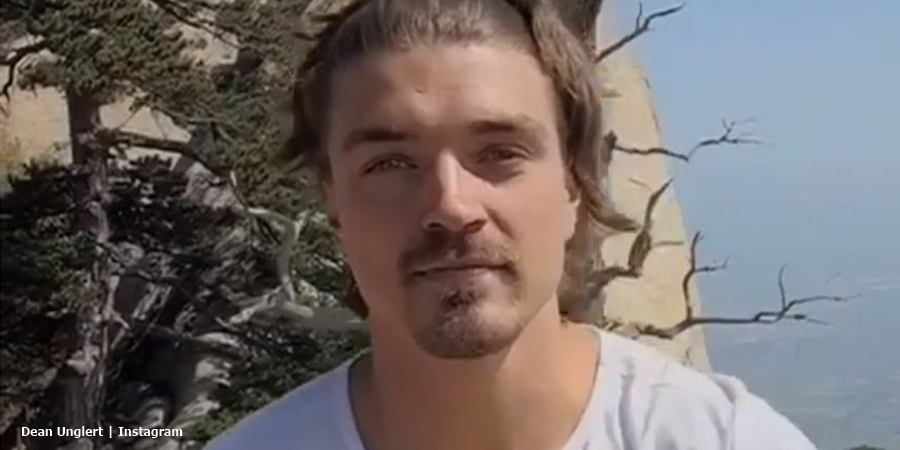 BiP alum Dean Unglert seems to favor adrenaline stunts as much as ever following his skiing accident last year. 11 months after the accident in Switzerland, he seems well on the mend. And, it looks like the potentially fatal accident didn’t stop his desire for extreme adventure. Now, he shared a stunt with a hot air balloon and freaked out his fans.

We reported that when Dean skied into a rock, he could have died. After all, the night and bad weather closed in. Rescue took ages, and he hurt himself badly. The reality star broke his femur, dislocated his hip and had to spend several days in a Zurich hospital after surgery. His girlfriend from Bachelor in Paradise, Caelynn Miller-Keyes rushed over to Switzerland.

Then they remained in Switzerland for a long time until he obtained clearance to fly home to the USA. Over the last year, fans followed his slow and painful recovery to full health. From wobbling around on crutches, to climbing mountains again, he made steady progress. Well, some people, might take things a bit easier, but not Dean! Now, the BiP alum shared some footage of him on a hot air balloon and nearly gave some fans a heart attack.

On November 10, Dean took to Instagram and shared a short video clip. Sailing really high up above the ground, Dean grabbed onto a rope with a handle and launched himself off in a giant swing. And right at the very end of the clip, it looked like he lost his grip and started falling. Totally shocked, some fans couldn’t understand what they just saw.

One BiP follower commented, “Brother you are giving me a heart attack!” And, another fan wrote, “Holy crap! Are you tethered in some way?!” Then, more comments came in:

But it’s not as bad as the BiP star’s video made out.

Freaked out fans relaxed a bit when someone pointed out that he swung off the balloon, but planned to let go as he went skydiving. Inside his backpack, a parachute saved him from certain death. Mind you, some fans still thought it way too extreme for them. Bachelor Nation star Ben Higgins wrote, “Yah, this makes me sweaty and anxious.”

One BiP fan joked, “jumping out of 2020 like…” And another one commented, “Heck to the nah for me. 😂😂!” What do you think? Sound off in the comments below.