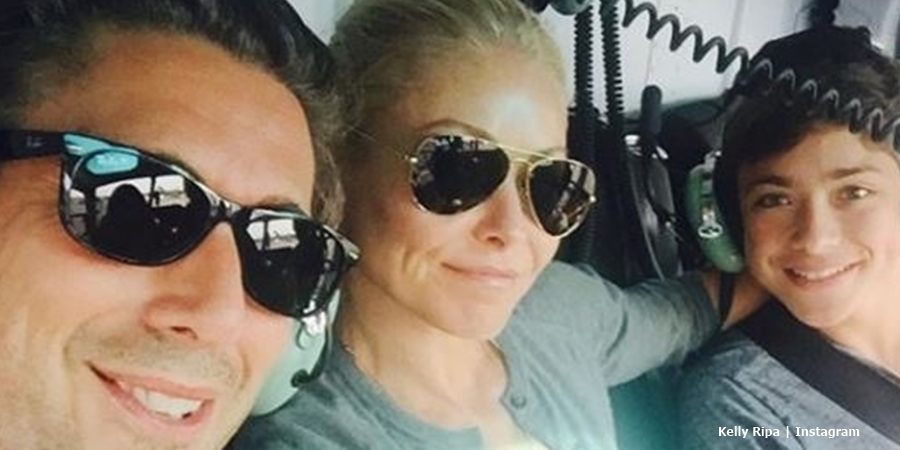 Kelly Ripa recently turned 50-years-old. But inside, she feels like she’s still much younger. She told her fans that she feels like she “stopped aging emotionally,” anyway. So, she seemed happy enough when she hit the Big 50. A few days ago, the LIVE with Kelly and Ryan star celebrated someone else’s birthday. David Muir from ABC News turned 47.

The host of LIVE with Kelly and Ryan goes back a long time with David Muir. Of course, they are not only work colleagues, but they became fast friends over the years. And, when Kelly turned 50, David popped into the studio and gave her a cake as a surprise. Ryan Seacrest announced that Kelly needed a birthday cake. And, around the corner, came David with the giant tasty treat.

Clearly, Kelly Ripa seemed thrilled. Fans could see that she wanted to hug him and thank him. But, she forced herself back and distanced from David. Then, David teased how they spent “millions” of birthdays together in the past. So, he teased Ryan, saying, “I know how you feel.” But then, along came David’s birthday, and Kelly shared some photos of them enjoying each other’s company.

Amo Mama reported that “[Kelly] celebrated…her friend and colleague’s birthday with a touching and fun post that documents the times they…spent together.” She took to Instagram and shared a number of photos from the past. Her caption read, “Happy birthday to @davidmuirabc an indisputable American gem! You are so loved. ♥️🌎.”

One photo revealed David and Kelly riding in a helicopter accompanied by her son Joaquin. And others showed big smiles all round. Many of Kelly Ripa’s fans said that they also “love” David Muir. One of them noted, “Aww I love him.” And another person agreed, writing, “And handsome! Happy birthday!” Then, one follower joked, “Can you give him my number Kelly? Help a sista out?? 😍.”

Lots of fans turned out and wished the ABC anchor a great birthday. Popular, comments like this one rolled in: “Happy birthday to my favorite journalist!” And then another appreciative fan wrote, “He is excellent news reader and Beautiful news presenter, (sic).”

IMDb reminds readers that Kelly Ripa’s friend David Muir arrived in the world in 1973. He celebrates his birthday on November 8. Fans know that he’s a writer and an actor, known for “Life” in 2017. Of course, almost everyone in the USA knows him from “ABC World News Tonight” as he anchored there for many years. Plus, he’s a familiar face from “20/20.”

It’s not a huge surprise that he selected a career as a reporter, as apparently, as a child he loved dressing up as one for Halloween.