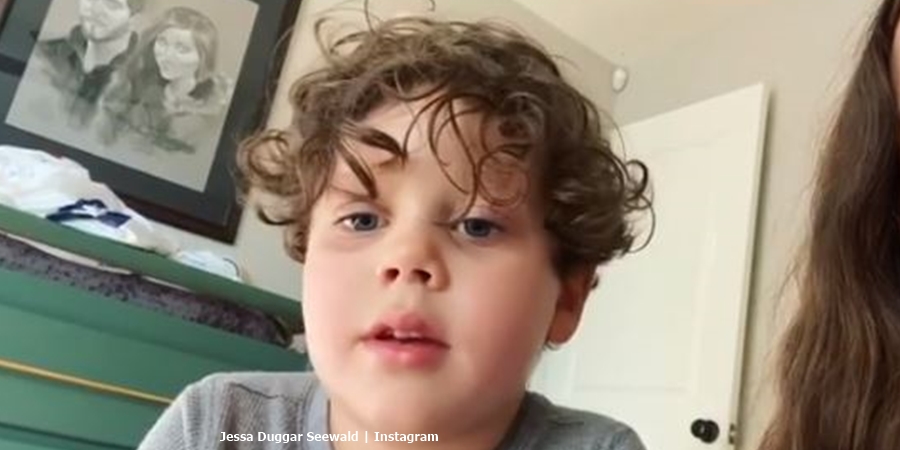 Jessa Duggar and Ben Seewald post up photos of the kids often. And sometimes, their pictures also include mommy Jessa. Then, young Spurgeon sometimes photobombs in the background. So, fans think he’s adorable and very cute. And now, Jessa from Counting On revealed that he also takes cute pictures.

Jessa Duggar shares some sweet photos of herself

On November 11, Jessa shared on her Instagram about Spurgeon. She posted up some photos of herself with 18-month-old Ivy Jane. The cute little girl enjoyed her mom’s attention as she held her up above her head, and then kissed her on the nose. It’s a lovely picture that really captures the joy of motherhood, fans think. But Ben didn’t take it. In fact, Spurgeon got ahold of the phone camera.

The five-year-old seems very talented, fans agree. In her caption, Jessa Duggar wrote, “Our new photographer is great at capturing candid family moments.” Then, she told fans to “swipe left” for the photographer. The fourth picture revealed Spurgeon took a selfie of himself. He wore sunglasses that reflected himself on the phone screen.

Counting On fans love it when kids take photos

Well, it’s not unusual for little kids to quickly learn the ropes when it comes to taking pictures on smartphones. Sometimes, TLC’s star Adam Busby from OutDaughtered shares photos taken by his quints. Of course, these days, with parents so frequently taking snaps of their kids, they quickly become accustomed to cameras. And Spurgeon figured it out well enough to take some cute photos.

One Jessa Duggar fan noted, “Love it! I always find some interesting pictures courtesy of my 7, 6, 3, and 2 year old children. My favorites are what I call “perspective from the potty” 😂😂.” Then another one commented, “[Spurgeon’s] got that moody photographer look too! 😆.” And others complimented Spurgeon on “taking a great selfie.”

Another TLC fan noted, “He has got to be the cutest little boy I have ever seen! His personality is amazing 🥰.”

Plenty of fans agree that Spurgeon seems like a very cute little boy. And, his mom often shares the family outings. So, fans see lots of footage of him outside of the Counting On show. InTouch Weekly reported in early November, that Jessa shared photos of her cute son ahead of this fifth birthday. And they also noted how much fans love the cute little man.

The outlet noted, “The Counting On star may only be 5 years old, but he’s already full of personality.” Jessa Duggar and Ben Seewald chose his unusual name from someone who influenced the couple. “Spurgeon’s moniker pays homage to Charles Spurgeon, a nineteenth-century Baptist preacher,” they reported. It’s too early to tell if Spurgeon becomes a preacher as well. But, it looks like a potential pro-photographer might lie in his future.