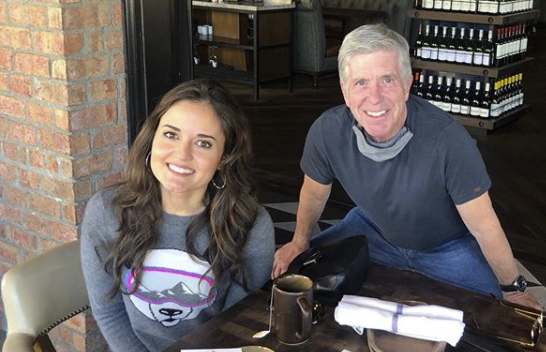 Long-time Jeopardy! host Alex Trebek passed away on November 8 after a battle with pancreatic cancer. He will be deeply missed, but fans still want Jeopardy! to continue. Some fans think Tom Bergeron would be an excellent choice to carry on the beloved game show.

Tom Bergeron was the long-time host of Dancing With The Stars before the show fired him over the summer. According to reports, there wasn’t any bad blood. Execs just decided to move the show in a new direction. And Tom’s okay with that. He said in a recent interview he wasn’t crazy about the direction the show moved in over the past two years and he needs a break. But DWTS fans definitely miss Tom.

In a recent Instagram post, several fans threw out the suggestion that Tom Bergeron should take over Jeopardy!

“Wouldn’t Tom be great to take over at Jeopardy for Alex Trebek? We need to start a movement to get Tom in!!” said a fan. Many others agreed. Tom Bergeron didn’t reply to any of these comments, but there’s still a chance he saw them.

Sad news this morning. His candid and courageous battle was an inspiration. #RIPAlexTrebek pic.twitter.com/OoU50Q84KF

So far, it’s all hearsay and fan suggestions. But if execs really wanted to boost Jeopardy! ratings, hiring Tom Bergeron could be a really smart move. They would just need to work to keep him happy.

Tom Bergeron Needed To Get Away From DWTS

The former Dancing With The Stars host recently sat down with John Melendez on The Stuttering John Podcast to discuss his relationship with the show. He’s thankful for the memories and friendships he made, but he has no desire to return. The host asked if he missed hosting, Tom replied,

“No, because it started changing early in 2018. There were staff changes, philosophical changes…I’m kind of digging the time off.”

He went on to say that some of the pro dancers actually said they were also considering leaving the show after his departure. However, Tom realized that many were young and had long, bright careers ahead of them and encouraged them to stay. Even though he’s enjoying his time away, he wishes his friends on the show lots of success.

Fans love Tom Bergeron because no matter what life throws at him, he manages to rise above it and handle it with grace. After DWTS announced his departure, Tom handled it very professionally online. Filling the great Alex Trebek’s shoes would be a tremendous job, but if anyone can do it, it’s Tom Bergeron.

Would you like to see Tom Bergeron as the new Jeopardy! host? Let us know what you think in the comments. Keep following us on social media to keep up with all the latest celebrity and entertainment news. We’re here to keep you filled in!