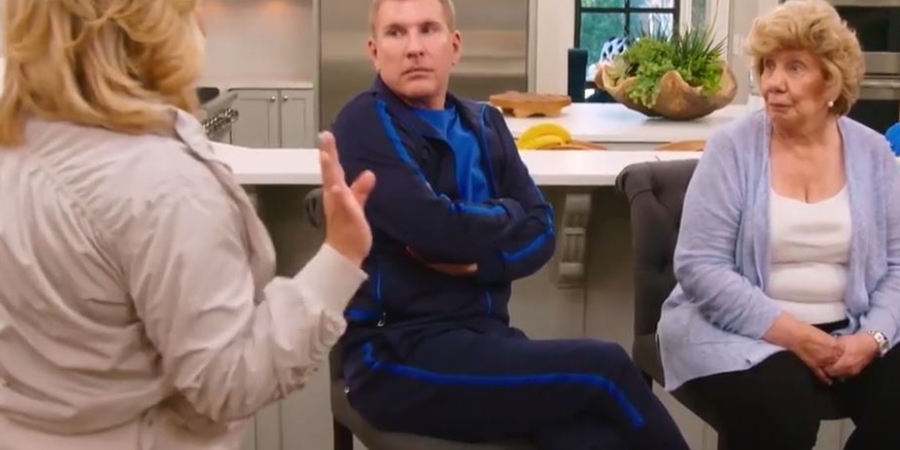 Chrisley Knows Best fans adore Nanny Faye. Unpretentious, she tells it like it is, which makes fans giggle a lot. In a bonus scene preview from USA Network, she and Todd talk about getting some work done on her face. And, the punchline came when Nanny Faye told Todd that he’s no “Brad Pitt.”

We reported in August, that fans dissed Todd Chrisley after he shared a selfie. It looked very much as though he went under the knife. Well, he’s always been “very open about using and loving Botox.” But, he denies plastic surgery ever happened. So, he slammed those fans who suggested he took the surgery route. However, there’s no denying the patriarch of Chrisley Knows Best looks younger than his 51 years of age.

In the bonus scene preview, Todd talked rather passionately to his mom, Nanny Faye. He took over Julie’s kitchen and brought in a professional. So, the place looked like medical rooms. And, he and his mom argued about looking young forever. In fact, Todd said that he just does what everyone in “Hollywood does.” He gets younger by the day. But, the elderly Chrisley Knows Best star seemed reluctant. So, Todd explained that the treatment that he wanted for her would remove all the brown and red spots on her face.

After going on and on about how it works for Hollywood, Todd told Julie he studied “Jennifer Aniston” and “Brad Pitt,” noting that people think he “resembles” Brad.” Fans thought it hilarious as Nanny Faye shot back with, “Todd, I’m your mother and you need to get it into your head that you’re not as good-looking as Brad Pitt.” Plus, she told him that they couldn’t all “grow young together.”

Fans of Chrisley Knows Best enjoyed the bonus scene preview very much. One of them commented, “😂😂😂😂😂😂 .only nanny Faye…😁😁” And, another one commented, “I love me some NannyFaye!! And Todd, bless his heart….bottom line I love this family and their show!!!❤️❤️❤️❤️”

Then, others loved Julie’s scene. After all,  she said that she and the kids would go and grab a pizza, seeing Todd took over the kitchen. So, Nanny Faye tried escaping from the room, saying, “I’m coming too.” But, Todd kept her there and when she saw the size of the needle, she complained about hating the needle. The Chrisley Knows Best star wailed, and even Todd looked unhappy. He said he usually lies down because otherwise, he feels “faint.”

While the scene looks and sounds a bit scripted, there’s no denying that Todd and his mom make for good humor. So, that explains why fans just can’t wait for each episode of the show.