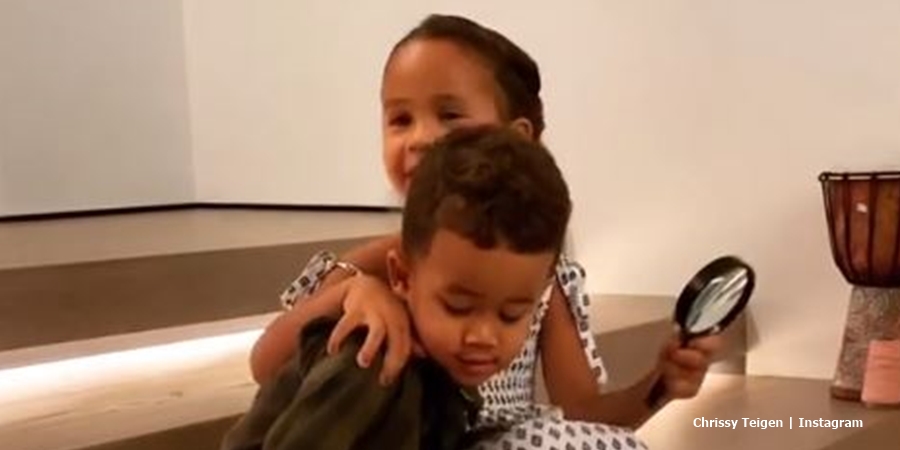 Chrissy Teigen shared that she and John Legend got the ashes of baby Jack. Tenderly, she arranged a “Therapy Teddy” which sat next to the box. And, she noticed something so sweet and moving that Luna did. And, in a separate clip, she revealed Luna sitting and chatting away with her deceased little brother.

We reported that Chrissy honored Jack’s passing with a new tattoo of his name. Recall, news came in October that Chrissy lost Jack after she suffered from excessive bleeding. And, there wasn’t enough amniotic fluid for her son. And, as she used up seven pints of blood during her pregnancy, her friend all got together and went and donated replacement blood in honor of her son.

Now, Chrissy Teigen and John Legend received the ashes of Jack. Packaged in a white box, she placed it with a Therapy Teddy where the whole family could see and interact with it. On her Instagram, she shared two clips. In the one, Chrissy caressed the box. And, she talked about the kind gesture by Luna. Chrissy captioned it with, “im just thinking a lot about jack today.” Noting that they deal with death openly, she said they “explain: things as best as possible.”

But, perhaps Luna’s too young to fully understand the concept of death. Nevertheless, Chrissy said that she treasured her “incredibly empathetic little mini.” Actually, she sounded like Luna cheered her up a bit. In her one video, Chrissy Teigen revealed that Luna sacrificed one of her favorite snacks. Sweetly, she placed it on top of the box of ashes.

In another clip, Luna sat on the couch in front of Jack’s box. And, she chatted away. At four-years-old, possibly she can’t imagine death. Stanford Children’s Org noted that preschoolers “in this age group don’t understand that death is permanent.” In fact, they might even believe [the deceased] eat, sleep, or breathe.” Possibly that explains the gift of a snack for Jack. In Luna’s mind, Jack might grow hungry.

Chrissy Teigen’s daughter really made a very sweet and thoughtful gesture if she thinks Jack’s around somewhere. The site also notes that often, small kids take their parent’s grief on board. In fact, sometimes they “fear” those sad reactions more than the idea of death itself. While they might not understand it, they pick up on the vibe. For some time, it looks like Luna chats with her brother and the Therapy Teddy. 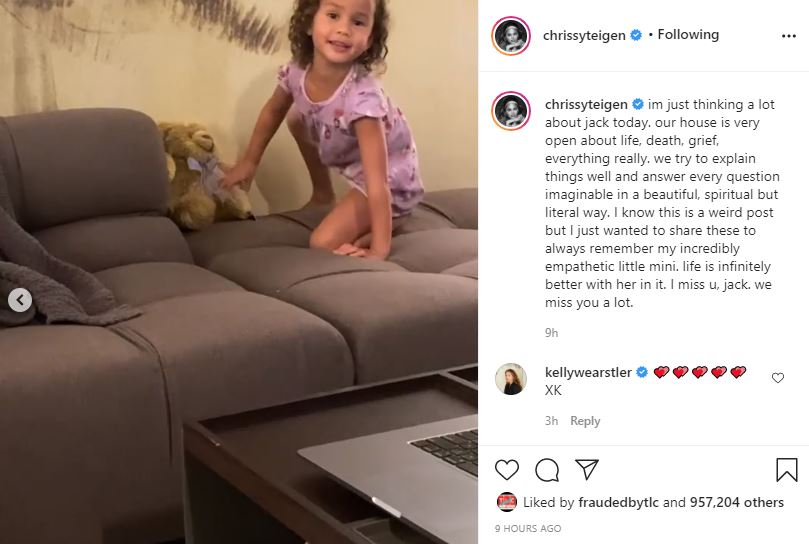 Therapy Teddy helps children understand emotions. And they provide a place for children to vocalize their inner world. In time, Luna will learn her brother went away forever. For now, it looks like Chrissy Teigen does everything she can to prepare her for that day of realization.