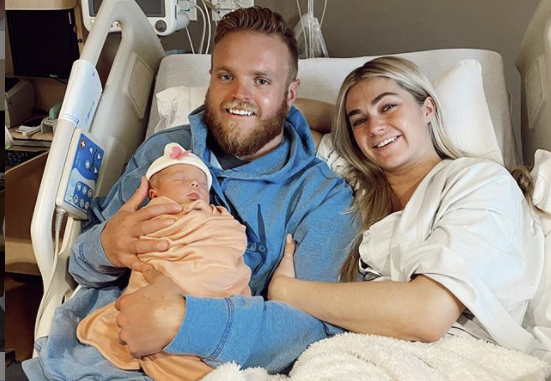 Dancing With The Stars pro Lindsay Arnold gave birth to her daughter on November 2. Now, just a week later, the dancer is confident enough to share her post-partum body with fans.

She posted an Instagram story that showed off her body and to also give her new post-partum clothes a shout-out. Lindsay loves her new nursing bra and soft leggings, which feel comfortable even with her C-section. 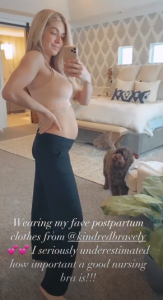 Many celebrities are getting comfortable showing off their bodies this year after they give birth. It really helps other women know that it’s definitely okay and normal that your body doesn’t just snap back after pregnancy. Total Bellas star Nikki Bella posted similar Instagram photos after giving birth to her son, Matteo, in July.

Lindsay Arnold’s Daughter Came Early, But Mother And Baby Are Both Well

“We could not be more in love with her and feel blessed beyond words to be her parents. … Thank you all so much for the love and support you have sent our way ❤️❤️” the dancer said to fans on Instagram. Several of her Dancing With The Stars castmates reacted.

“So beautiful! Obsessed with her!! 💗💗 Love you Linds!” said Hayley Erbert.

“She’s dancing already!!!!!❤️❤️❤️ What a blessing. I’m so happy,” said Season 28 champ Alan Bersten. No one can say for sure if Sage will be a dancer, but Lindsay said she gets that question quite frequently.

Will There Be A New Generation Of Dancers?

“A lot of people have asked, ‘Are you going to have her dance?’ Of course, if she wants to dance, I would love that because I know a lot about it,” Lindsay told Us Weekly in July. “I just really look forward to helping her find the thing that she loves to do and then being her biggest No. 1 fan.”

Lindsay Arnold is the oldest of four sisters, all of whom dance. It wouldn’t be a surprise to anyone if Sage grew up to be a dancer as well.

Dancing With The Stars power couple Maksim Chmerkovskiy and Peta Murgatroyd are the parents of a three-year-old son and are teaching him to dance. It would be absolutely adorable if Lindsay taught her daughter as well.

Lindsay Arnold says she hopes to return to Dancing With The Stars next fall. But for now, she’s content to watch her friends compete while she stays at home with Sage. Do you hope to see Lindsay compete in Season 30? Let us know in the comments. Don’t forget to catch the new episode tonight at 8 PM!