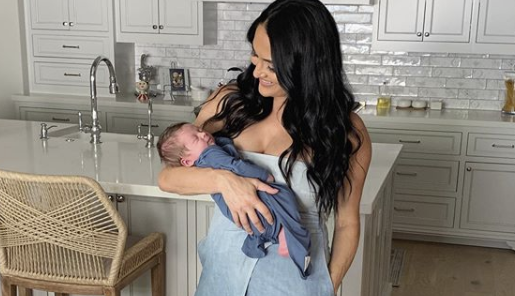 Nikki Bella gave birth to her son Matteo on July 31, but any mom knows that your body doesn’t go back to normal overnight. The former WWE star decided to get real with fans and show the hidden side of motherhood.

Head to my IG stories for the raw and real me… yeah super scared! 🙈

In a series of videos on her Instagram story, Nikki reveals she is still 18 lbs away from her pre-pregnancy weight. However, she is committed to losing the baby weight through healthy amounts of diet and exercise.

She discusses how she plans to breastfeed her son and emphasizes that his health comes first. As a result, Nikki says there won’t be any “crash diets or starving” herself. She adds that it’s okay to have a cheat day now and then. Despite all the changes pregnancy put her body through, she says her son is worth it and that she has “the most amazing little boy.”

Nikki finishes by offering her support and well wishes to all the other mothers out there. After the videos, she posted an image of her scarfing down a frozen dessert. It’s nice to see she really practices what she preaches about cheat days.

For some extra inspiration, a few hours later Nikki posted some videos of her exercise routine. “Working on getting that body back! 5 weeks postpartum,” she captioned them.

Nikki Bella Couldn’t Be Happier With Her Family

PEOPLE featured the Bella Twins, their partners, and little ones in a recent edition. Since it came out, Nikki has had lots of fun showing off photos from the shoot.

BTS at our Exclusive @people shoot 💙 On shelves today! Go pick up your very own copy and tag us! ✨🦋🤱🏽🤱🏽 #buddyandmatteo #bellaboys

Her fiance, Artem Chigvintsev, is also incredibly proud to be a parent. The Dancing With The Stars pro returns to the stage in just a few weeks, and can’t wait to give his family a shout out.

“Last season, watching from the sidelines, really made me realize how much I really miss the show, miss performing live.” He continued, “I just can’t wait to get back. I want to dedicate this season to my little boy.

The Dancing With The Stars stage is also where the little family began. Nikki and Artem were partners in Season 25.

We won’t find out who Artem’s new partner is until the premiere, but fans believe they already know. Artem and The Bachelorette‘s Kaitlyn Bristowe were supposed to compete in a previous season until plans fell through. Fans believe it’s fate that they could compete together this season.

Nikki and baby Matteo will happily cheer them on from home.

Are you happy for Nikki and Artem’s family? Leave your ideas in the comments below. As always, make sure to check in with us soon. We’re here to tell you the latest celebrity and entertainment news. In the meantime, you can also follow us on Facebook and Twitter. Stay tuned!