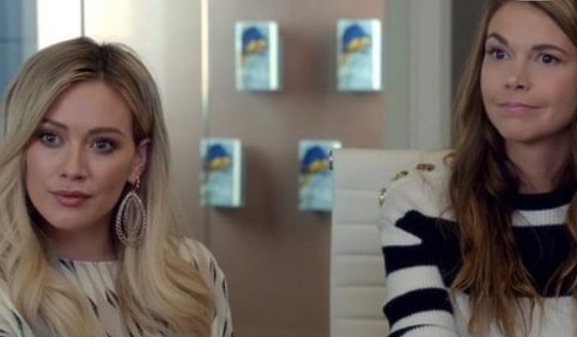 Younger is currently filming their final season in New York City. The show that stars Sutton Foster as Liza Miller, a 40-something divorcee who lies about being in her 20s in order to get a job in publishing will soon come to a conclusion.

What does showrunner Darren Star say about the upcoming season? And when should fans expect to see it on TvLand?

As Younger starts to film, Darren Star has already confessed that he is not quite sure how the series will end. Speaking to TV Insider, he shared that they have “a couple scenarios are on the table.” Nonetheless, he does promise that the show will end in a “satisfying way.”

Is this really the end? It seems quite likely, as everyone now knows Liza’s secret. Star confirms this by sharing that “we have been thinking of this as a possible last season for a while, and we still are.”

Already, there is talk about a Hilary Duff spinoff, featuring her character Kelsey Peters. Fans want to know whether the Lizzie McGuire star’s recent pregnancy announcement will affect the spinoff. That is one of many questions still not addressed.

When Is Younger Season 7 Coming Out?

Younger Season 7 started filming in New York, in mid-October. But, since filming began, the stars have not shared anything from the set. Although we can assume they are filming in Brooklyn, we don’t have many details.

In addition, Darren Star has not revealed when TVLand fans get to see the likely final season.

By now, we should have had Liza’s answer to Charles’ marriage proposal. Does Josh go to California?We should also know what is next for Kelsey’s blossoming career and whether Maggie finally finds true love. Moreover, fans want to know what a Diana and Enzo marriage looks like.

What was the delay? Well, like everything 2020, Covid-19 has stalled the popular show. Originally, they were going to start filming in mid-March. This is right around the time the coronavirus pandemic hit. New York City was one of the early cities to lockdown.

Covid-19 hit Younger hard. Debi Mazar got the coronavirus and was very ill for several weeks. Thankfully, she is ok. But, it was not safe to start filming until October. Assuming they can complete the season now, fans should expect to see the new season sometime in 2021.

That is not all they should expect to see. There promises to be some familiar faces returning to the show.

Younger creator, Darren Star, has shared that some familiar faces will be returning for Season 7. He teased a bit of what fans should expect. “We’re going to see a lot of characters we’ve seen over the past number of seasons and there are going to be some new, unexpected relationship turns.”

Over the years, there has been a cornucopia of authors, lovers and other characters to pop in and out of the series. Could we see the return of Thorbjørn Harr as author Anton Björnberg? What about Richard Masur as the lascivious Edward L. L. Moore? Or perhaps Aasif Mandvi as Jay Malick, the guy who liked cats and Liza?

Then there is Liza’s ex, David, played by Paul Fitzgerald. Are they really divorced? Last we saw those divorce papers were in the trash, at the hospital.

It certainly sounds like Younger Season 7 will be spectacular. Now, they just have to finish filming it.